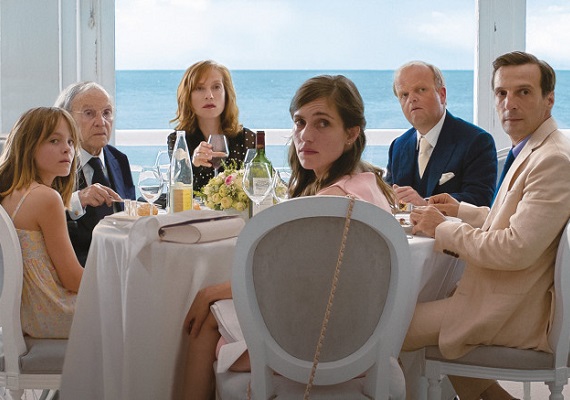 HAPPY END is Michael Haneke’s satirical exploration of a rich family of industrialists whose dysfunctional daily lives become linked to the turbulent ongoing immigration nightmare that is Calais, thanks to the son and putative heir of the family building business.

This year’s Cannes Competition line-up is fraught with startling dramas and the intriguingly entitled HAPPY END joins the list with its impeccable production values, sophisticated interiors and top-drawer performances from a starry ensemble cast, including veteran Louis Trintignant and, of course, Isabelle Huppert.

Isabelle Huppert plays Anne Laurent, the doyenne of the family’s Belle Epoque villa  (with Moroccan staff) who has recently taken over the construction business from her ageing father Georges, who is stumbling on the foothills of dementia. Recently engaged to Toby Jones’ English lawyer, tasked with handling a UK deal involving the business, her son son Pierre is a non-starter prone to drunken outbursts, and her brother Thomas (Kassovitz) has a new wife and baby and a smart little daughter (Harduin) from a previous marriage (and has broken into his computer and sussed his game). So far, so dysfunctional. Meanwhile, we are treated to glimpses of the migrant crisis on the streets of the city.

This is a malevolent movie that wears its unsettling undercurrent discretely hidden under its haute couture outerwear, and as in all Haneke’s fare, we know that the ending will be far from happy. MT