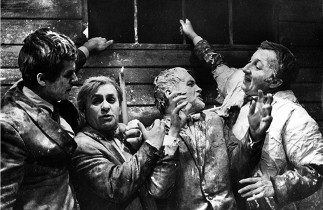 Skolimowski shot the last part of his trilogy featuring the anti-Stalinist hero, Andrzej Lesczczy, in 1967. The completed film was withheld by the censors but was finally released in 1981 when he returned to Poland to screen a new version with a prologue of 25 minutes, showcasing his more recent artistic activities.

In 1980 Skolimowski played German photographer Hoffmann in the Volker Schloendorff film Circle of Deceit. Set in Lebanese capital of Beirut, it shows the widespread devastation of the country, but also features the filmmaking process where he discusses with Schloendorff the modus operandi of a German photographer in a war torn country. There are clips from pro-Solidarnosc demonstrations that took place in London and an exhibition of Skolimowski’s paintings in a gallery there. Images of Speaker’s Corner and gloomy shots of contemporary Warsaw round up this prologue that feels like a contempo newsreel of the era.

The original version of Rece Do Gory features the former medical students, now adults, travelling in a sealed-up railway compartment. Andrzej (‘Zastava’) (Skolimowski) is now working as a vet, the hero of Identification Marks: None and Walkover is seemingly taking drugs with his friends Joanna (‘Alfa’) (Szczerbic), Adam (‘Romeo’) (Hanuszkiewicz) and ‘Wartburg’ (Kobiela). But it turns out that they are only knocking back placebos and calling each other by car names; very appropriate for the director of The Departure. Whilst the anti-Stalinist parodies are biting, Skolimowski goes further back in history, lamenting the fact that the train the medics are travelling in could well have been used by the Nazis, deporting Polish Jews into the death camps. Penderecki’s mournful music reminds that Polish history is never far from tragedy. This is underlined at the end when the actors of the original film appear on the screen in the 1981 version – minus Bogumi Kobiela, who died, only 38, in a car crash in 1969.

Whilst it is difficult to imagine how the original version of Rece Do Gory might have looked, the prologue gives us an idea how Skolimowski would have developed as a filmmaker if he would have been allowed to work in Poland. Both parts of the new version are permeated by an overbearing feeling of sadness that connects the past and present states of humanity as a whole: there is little optimism, just different forms of melancholia. AS