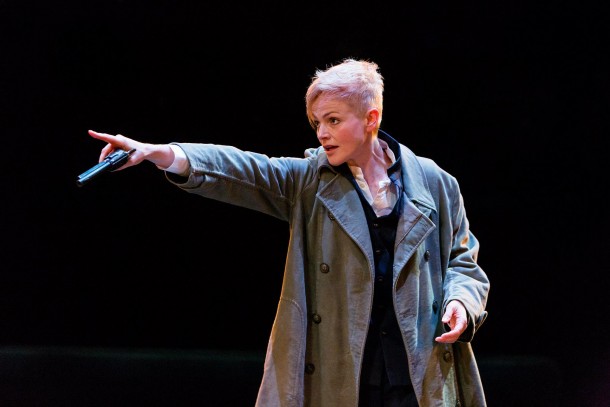 Margaret Williams’s stage-to-screen film has Maxine Peake (The Theory of Everything, Silk) in dynamite form in the lead of one of Shakespeare’s most tragic plays, HAMLET. She is not the first woman to play the Prince: Sarah Bernhardt and Frances de la Tour have also taken the part of Hamlet – but she is the first to be born female in the role but identifying as a boy; her blond hair cropped stylishly and wearing a marine blue sailer’s jacket, echoing Saint Exupéry’s ‘Le Petit Prince’. Filmed by Williams, who used eight different cameras in the shoot, Peake is not the only cross-gender role – Gillian Bevan is cast as Polonius and Jodie McNee plays Rosencrantz with Goth undertones.

Theatre director Sarah Frankcom chose an appropriately minimalist styling (using iconic Danish designs and tableware) for her re-telling of the Danish tragedy that was a sell-out at Manchester’s Royal Exchange Theatre last autumn. Peake is no newcomer to Shakespeare having played Ophelia. Hamlet is one of the most difficult parts any actor can play but she pulls if off with aplomb, getting into her stride with a mixture of playful accents and a defiant swagger. By the end of the Act I she is really enjoying herself tremendously and so are we. Judiciously, she tempers fits of anger with moments of vulnerability, gentle humour and even cheekiness here and there, as she takes on the mantle of the confused and indignant son who has only just lost his father, when his mother marries again to his uncle and father’s murderer.

This Hamlet is supported by a sterling British cast: John Shrapnel, Gillian Bevan and Barbara Marten give particularly thoughtful and nuanced turns and Katie West offers up a delightful Ophelia full of charm and feminine vulnerability. The film is divided into two parts: one of 123 minutes, followed by a final one of 70 minutes. MT

The film is distributed by Picturehouse Entertainment | NOW ON DVD.