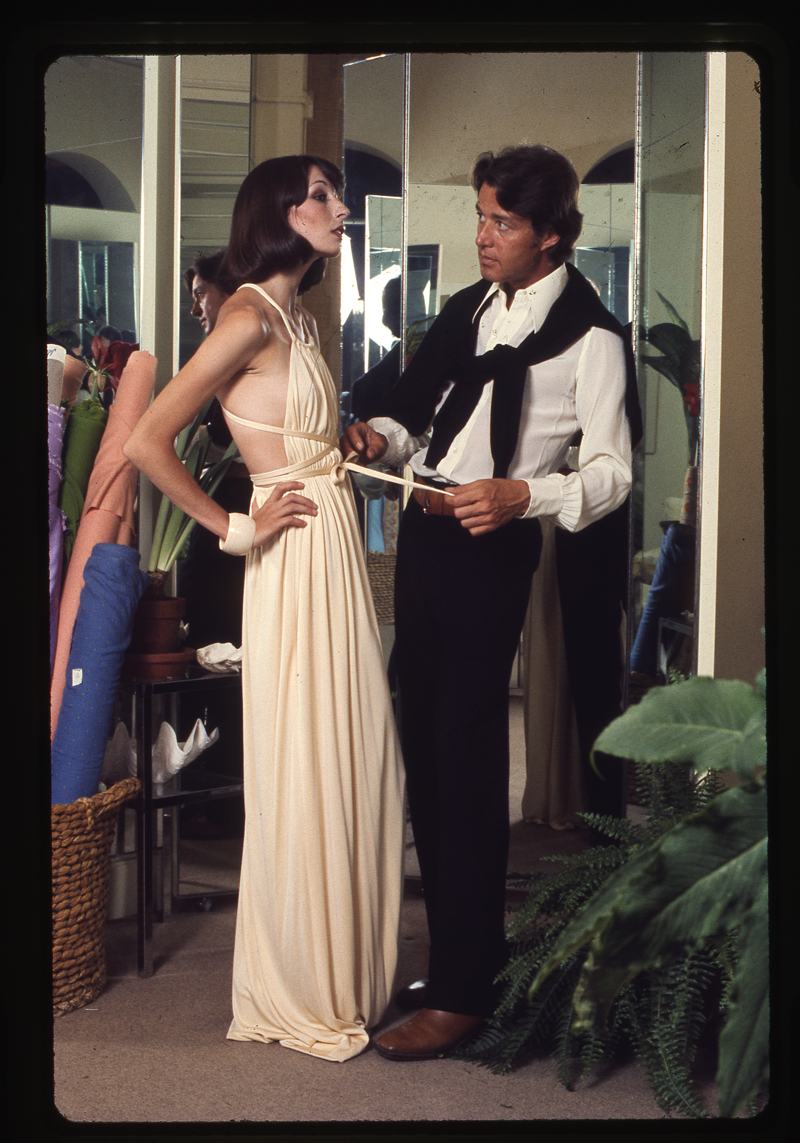 Well known for his insightful portraits of the fashion world: Dior and I (2014); Diana Vreeland: The Eye Has to Travel (2011), which he co-directed; and for Valentino: The Last Emperor, (2008), which he co-produced, Tcheng gets top marks for this exposé on Roy Halston Frowick the all American boy from De Moines, Iowa who put America in the frame with his flare for flattering the female form.

After the boxy styles and artificial fabrics of the Sixties, Halston’s voluptuous dresses enveloped and caressed curves and cleavages as they “danced around you” according to Liza Minelli, one of his biggest advocates and a firm friend. All this was in part thanks to his master tailor Gino Balsamo whose clever crafting created single-seam clothes that ‘freed the female body” and swirled and seduced due to the unique simplicity of their genius bias-cut.

Apart from its length the only slight criticism of this biopic is the gimmicky structure that sees actor Tavi Gevinson as an innocent bystander, sleuthing through the Halston company archives and VHS tapes to needlessly sex up the sinister nature of Halston’s final fall from grace. It’s a device that feels tacky and counterintuitive to the sophisticated slimline slinkiness of the designer’s raison d’être.

Born during the Depression in 1932, Halston was an ordinary gay man who instinctively knew how to re-invent himself as a suave mover and shaker. Starting out in the 60s as a milliner to Bergdorf Goodman famous clients (Jackie Onassis wore his pillbox hat), he rapidly moved on to create his own brand through celebrity endorsement in New York’s 70s and 80s. Sashaying onto the dance floor of Studio 54 with his beautiful entourage, known as the Halsonettes, he moved on with movie stars, and invented “hot pants”. Andy Warhol and Elizabeth Taylor were amongst his friends and clients. He also dressed the American athletes at the ’76 Olympics, the girl scout leaders, the NYPD and Avis car rental staff, as well as the Martha Graham dance troupe.

His all American freeform fashion parade at Paris’ Palace of Versailles in 1973 featured black American models and set the night alight with a fizzing floor show, despite French domination of the event. China was the next step and we sample previously unseen footage from NBC visiting a silk factory where workers got a chance to try on creations made from their own fabrics.

But Halston was to grow too big for his own boots. Soon he moved offices to the glamorous mirrored interiors of New York’s Olympic Tower. His keenness to develop the brand saw high signing a multi-million dollar deal with conglomerate Norton Simon. This took away his rights to his designs and name, while offering him continued creative control, allowing him to jump into bed with the likes of Max Factor, facilitating the launch of his first fragrance, Halston, with a bottle designed by longterm collaborator Elsa Peretti. The brand was soon on sheets, towels, even leather goods. But gradually new bosses with scant appreciation of fashion or design would take over, and one by the name of Jacob Epstein would be his nemesis.

Halston launched a worthy endeavour to dress mainstream America through a deal with JCPenney (a sort of US Marks & Spencer). Termed “From class to mass” the venture focused on volume rather than artistry, and did not go down with well with Bergdorf Goodman, or his high-net-worth clientele, many of whom cancelled orders.

By this time Halston’s lavish lifestyle was also becoming financially exhausting, along with his on-off Venezuelan lover Victor Hugo, who had arrived on the scene purely for his looks (“One night Halston dialed a dick”) and then became involved in the business, upsetting several members of his team. The final segment sees Halston re-connecting with his family and employing his niece, Lesley Frowick, who emotes on his HIV/AIDS demise rather too copiously.

Halston works best as a chronicle of his fashion design artistry with its eye-catching footage and fascinating characters of the era. The business side of things often feels over-laboured and detailed. But it’s still an entertaining biopic to watch. Clearly Halston was a force to be reckoned with, totally redefining the fashion world, and bringing America to the forefront with his fabulous legacy. MT

ON RELEASE On various platforms including Dogwoof.com