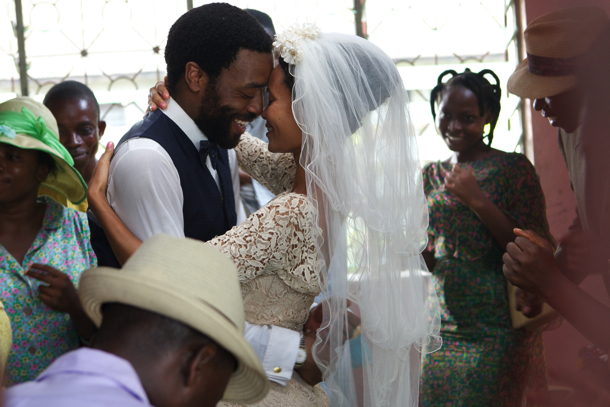 Olanna (Newton) and her twin sister Kainene (Rose) celebrate Nigeria’s independence in October 1960 with their upper-class parents and a future minster of the government. They are expected by their parents to thrive in the new elite, but whilst Kainene stays with the family clan, British educated Olanna moves with her boyfriend Odenigbo (Ejiofor), a radical academic in the eastern city of Nsukka. Kainene falls in love with the British journalist Richard (Mawle). For all his revolutionary talk, Odenigbo is very much in thrall of his mother, who calls Olanna a witch and manipulates her maid into seducing her son while he’s drunk.  Olanna, who beds Richard as revenge for this unfaithfulness, later forgives her boyfriend and  adopts the baby resulting from Odenigbo’s one-night stand finally gaining the respect of her future mother-in-law. These domestic scenes have a soapy quality to them that feel at odds with the overall political context of the piece, and the ensuing shift to high melodrama when the couple’s wedding is interrupted by an air raid on the outbreak of civil war (which started in 1967) feels over-sensationalised compared with what has gone before, despite the intensity of feelings, which were understanding running high at the time. We are unprepared for this sudden shift in tone, which feels overly dramatic given the low-key amorous jostling and domestic ups and downs of the first half of this debut feature. 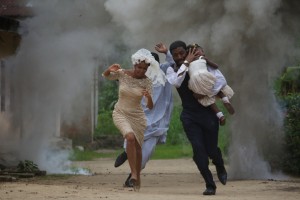 That said, Bandele is clearly at pains to reflect the fervour of the Igbo nation, that, feeling threatened by the central government in Lagos, eventually rises up to become the independent Republic of Biafra. During an extremely bitter, three-year war Olanna and her husband are forced to flee more than once from the advancing troops of the central government. In the last months of the war the sisters are reunited, but Kainene, who helps to run a refuge camp with her husband, is lost in the chaos of atrocities.

This is playwright Bandele’s screen debut. He has worked with the Royal Court and the RSC, and although he creates an intense melodrama reflecting the bitter feelings generating by colonialism set against the relationship of the two couples: Bandele seems to side with Kainene, who argues that the civil war is not a direct result of colonial repression, but a war of resources. But it is harrowing to see how helpless these people are in their individual ways: their education and intellect in creating a civilised society, negated and brushed aside by forces beyond their control. They belong viscerally to the Igbo nation yet intellectually to the past – the war has obliterated this past and everything everything that once had meaning. It is ironic to hear the voice of Biafra’s leader Odumegwu Ojukwu, an Oxford graduate, asking for “a fight to the last man” – just as many educated white men before and after him.

Thandie Newton dominates HALF OF A YELLOW SUN, somehow playing the rest of the quartet into the background. Her Olanna is the driving factor of the narrative, carrying it mesmerizingly forward. Whilst the action scenes are sufficiently brutal, they do not overshadow the political implications: this is not a simple anti-war film, but one that argues from a reasoning, as well as emotional perspective. The camera is not always as innovative as possible, but overall the film gives enough startling images, reflecting the vibrant landscape and creating a palpable sense of place and ample food for thought without degenerating into a didactic, sterile thesis.