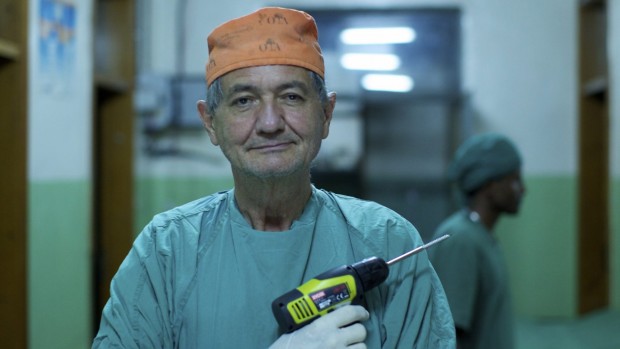 Director, writer and producer Eric Gandini is known for exploring aspects of our highly evolved Western society, first through his documentary debut The Swedish Theory of Love (2015) that delves into the existential black holes in the Swedish lifestyle, and now with his latest documentary The Rebel Surgeon where he takes the debate further by comparing the Swedish medical system with that of a still developing country of Ethiopia, through this slim but heart-warming story of a maverick orthopaedic surgeon, Erik Erichsen.

We hear how Dr Erichsen became so disillusioned by Swedish bureaucracy that he dropped out and moved to the East African country to work as a general surgeon, with his Ethiopian-born wife and partner Sainnat. Amongst the tropical lushness of this magnificent part of the World, he finds professional fulfilment (some might say “playing God”)  as never before, rescuing lives in a small field hospital in the small community of Aira and with very limited resources – there is neither money for, nor access to, decent equipment, so he must be enterprising and creative in his methods. He works with a small domestic drill, plastic strips, jubilee clips, bicycle spokes and fishing lines: he even uses a woman’s hair slide during prostate surgery, and performs life-changing operations on the sick and wounded patients from all over the region. Ethiopians have a tough and uncompromising life but they never die alone, unlike most people in so-called ‘civilised’ societies. Here Erichsen exchanges bureaucracy for a heavy patient list – each person gets a few minutes – but they are grateful as only three doctors are available for every 100’000 inhabitants. Dr. Erichsen and his wife work full on to clear their load, but their work is 100% treatment and diagnostic-based, rather than computer or admin-orientated.

Made on a low budget, and none the worse for it, Gandini’s  film makes for compelling viewing, enriched by images of the magnificent verdancy of the region’s tropical landscapes which contrast starkly with horrific nature of the medical cases presented and the gruesome surgical procedures that follow. Erichsen clearly loves his work and the adulation that comes from his patients, but his dry sense of humour and pragmatism also provide laugh out loud moments, along with some wincing. There is space to reflect on how extreme material hardship is in no way linked to emotional poverty; clearly these rural Ethiopians are a stoic bunch who accept their prognoses without flinching, and who look after each other and are eternally grateful for the Swedish doctor’s help, often returning to visit once they are cured. It’s not all good, but death is part of life for these people, and they appear to accept their fates philosophically, if nothing can be done.

It is easy to see why Erichsen finds the work in Ethiopian so satisfying. Here his opinion is unchallenged (except occasionally by his wife) and he is bound by few rules, hailed as a hero, and gets to make all the decisions. In Sweden  he is challenged not only by the system, but also by the patients themselves who are exacting and whose expectations of life and medical treatment available are extremely exacting, Erichsen insisting that the mindset of the Swedes is far worse than the material poverty of Ethiopia.

After his decade long tenure in Ethiopia, Erichsen must return to life in Sweden, which he does with a heavy heart. And we are left contemplating the future of his Ethiopian surgical team who will battle on without him. Meanwhile, life will never be the same for Erichsen and his wife back in the Northern Europe, but every cloud has a silver lining, as we discover in the finale.