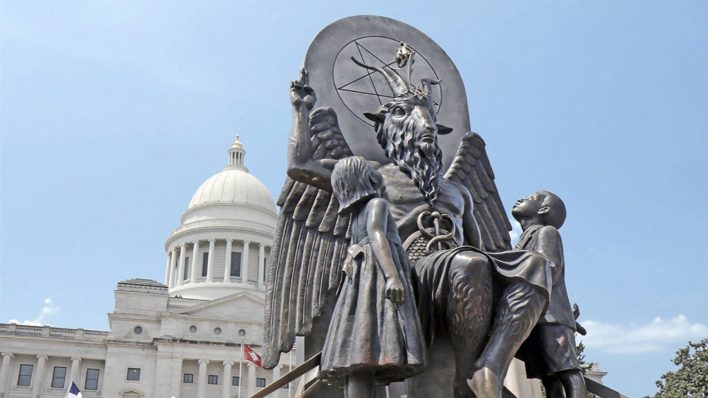 Satanism is gaining ground, but don’t panic. Penny Lane’s drôle but disappointing documentary will explain why. According to her findings, the old Devil we can come to know and love has actually been foisted by his own petard. His cult has been hijacked by a motley crew of rather ordinary people who just want to get together and counter the mainstream forces they see dominating America. No harm done. Counterbalancing  is certainly a reasonable idea, but not a compelling premise for a a full length feature documentary.

Satanists have chosen the rather apt name of The Satanic Temple (TST for short) to represent their cause – and simply because no one else had chosen this title, they checked on the internet, and it was available. And their main man and co-founder really looks the part too with his glazed right eye and shifty expression: Lucien Greaves – not his real name – works jolly hard for the organisation as its spokesperson, ensconced in the black-painted wooden clad house (straight out of the film Halloween) in Salem Massachusetts. Some of the other supporters look rather weird too in their Gothic garb and horned headgear, but that’s about as scary as it gets. And they don’t have much to say for themselves  either, beyond criticising the people they vehemently oppose.

But doesn’t a religion have to have conviction, spirituality, beliefs and customs that transcend mere civic duty?. Amongst their seven tenets the Satanists list: compassion, a struggle for justice, and ‘the inviolability of the body’. But this doctrine could easily apply to the Girl Guides.

And Lane’s documentary certainly doesn’t make us quake in our boots over these so-called Satanists. Mild fascination turns gradually to boredom as Hail Satan! plays out, running round in ever decreasing circles in its effort to get to the crux of the organisation. What TST purports to represent seems ill-defined, but its certainly anti-establishment. The thrust of their activity is clearly to oppose government efforts to establish religious totems such as a granite structure listing the The Ten Commandments in front of a state house, and to erect their own idol which is a metallic figure called Behemoth.

But once we discover that name Satan is just a facade for TST’s rather pointless activities – such as attending ‘unbaptisms’ – and it adherents are just a bunch of average punters with nothing salacious or particularly macabre about them (except their black garb) the whole documentary starts to feel quite tedious. And the fact that they feature regularly on Fox News spinning endless ‘Satanic’ narratives won’t have a novelty value forever. On their website they maintain: We acknowledge blasphemy is a legitimate expression of personal independence from counter-productive traditional norms”. Isn’t this just the same as supporting free speech?. And there’s nothing evil about that.

There’s nothing even o suggest that Satanism is a religion. Ok, it doesn’t espouse violence or evil. Infact it doesn’t really espouse anything cogent at all, apart from being a force for decency and liberalism, and a mealy-mouthed opposition to the mainstream. But behind their black hoods and wicked headgear, there is little talk of faith, spirituality or even morality. Infact there’s no talk of anything other than their smug feeling of hiding behind something that actually doesn’t represent them at all. So their whole existence is misleading. But it’s gathering ground. Their numbers swell day by day, and you might even find yourself joining them one day. But make no mistake. If you’re drawn to this film in the hope of experiencing of something dark and dastardly, you will leave feeling disappointed. At the end of the day, these Satanists are just a bunch of small-town do-gooders.  MT