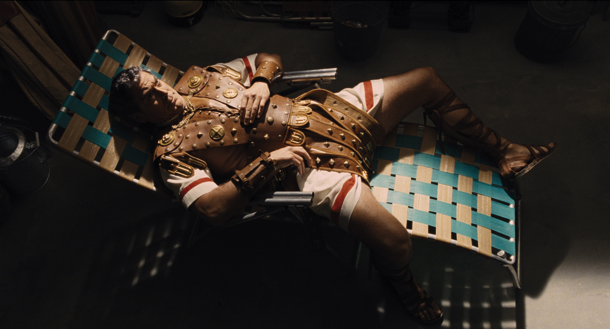 Underneath its all-singing, all-dancing comedy pretensions and Busby Barclay showstoppers Channing Tatum Does a Comme des Garcons style vignette) lies the real-life story of a saintly studio ‘fixer’ Eddie Mannix (Josh Brolin), whose days are dedicated to serving the studio’s interest in an era where the studio controlled the actors, writers et al. Mannix is a decent man who does good by everyone he works with; not unlike the worthy Larry Gopnik in the Coens’ much undervalued A Serious Man. Hail is a mainstream commercial caper and Mannix is a suaver operator, that said. A devout Catholic with zealous confessional habits: his worst sin is nicking a few ciggies – he’s trying to stop smoking; his job is to ‘physically’ produce a picture called Hail, Caesar! aka A Tale of The Christ which has the studio’s man of the moment Baird Whitlock (George Clooney) starring in the lead as a Roman aristocrat who roots for Jesus, so impressed is he by ‘seeing the light’.

Dealing with his daily dose of prima donnas (male and female) Mannix copes with good grace and calm control thanks to the services of his hyper efficient PA who always manages to help him find a happy Hollywood ending. Apart from Hail, Caesar! He’s managing Scarlett Johanssen’s accidental pregnancy as the ballerina star of a pool-based musical and Ralph Fiennes in a Noel Coward turn as the director (Laurence Laurentz) of a dainty drawing room drama. Although Fiennes is slightly underused here, his owning leading man Hobi is a vehicle for the talents of Alden Ehlenreich who is dynamite as a Western star with a spectacular sideline in lassoing, and who also ends up saving the studio with his streetwise charm.

The butt of the Coen’s Jewish-style humour here is Catholism and although it manages not to offend, it doesn’t quite get it either – perhaps it’s easier to make a comedy out of a religion that’s closer to your heart and they should leave the Catholics to the likes of John Michael McDonagh or his brother Martin. Despite that, the script is whipsmart  and thanks to some deft editing keeps on firing like a kalishnakov with some really entertaining moments, particularly when Frances McDormand’s editor gets her scarf caught in the editing machine.

But Mannix’s biggest problem is that Baird Whitlock has vanished, kidnapped by Hollywood communists. These old, disgruntled writers hold their captive at a grand Malibu beach house where they ruminate over tea and cakes as to why their scripts never made them rich.- another underlylimg Coen theme. But as they await a $100,000 ransom payment, these salon Marxists try to enveigle Baird into their way of thinking. As Baird, Clooney gets a dorkish role which gives him plenty of opportunity to show off his thighs and his clever comedy skills while still being every inch a star (and clearly not just a pretty face).

Star power also comes in the shape of Tilda Swinton who plays identical twin sister gossip columnists who compete to dish the Hollywood dirt. But Eddie has his hand on the pulse as he beavers round cleverly manoevring Hobie into dating his co-star Carlotta Valdez (Veronica Osorio), providing another glittering sideshow. Mannix is also toying with a temptingly lucrative offer that would allow him more ‘family time’ but clearly less work satisfaction – another evergreen theme.

In the end, the Coens manage to deliver a film that Frank Capra would be proud of, premise wise. The hotch potch doesn’t quite coalesce but it’s an entertaining charmer  that sprinkles stardust and glamour on its more weighty themes to deliver that classic Hollywood tenet the ‘happy ending’.

Mannix is the eternal everyman; the good shepherd leading his flocks and bringing them to safety each night. The man everyone wants as their friend or partner when the champagne glasses are put away. And Josh Brolin plays him well in a role that puts him firmly up there as a seasoned star in the Hollywood firmament. MT