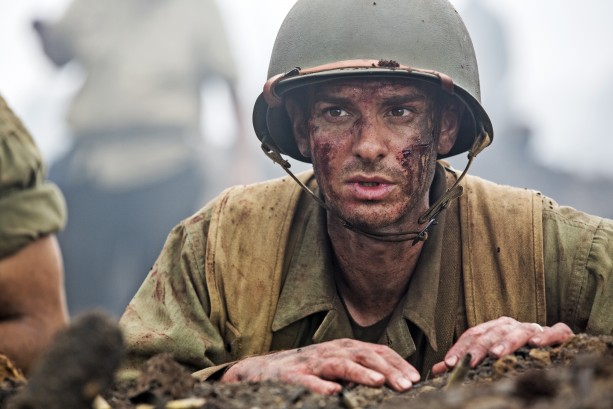 Hacksaw Ridge is one of the most violent and gory films about pacifism ever made. But there again, its director is Mel Gibson. Based on the true story of a war hero and conscientious objector from Virginia, it is a film full of cliches and contradictions that still manages to move and inspire with its heartfelt and plausible narrative underpinned by the simple message of sacrifice and faith.

In common with Gibson’s unflinching dramas: Apocalypse, Braveheart and The Passion of Christ, Hacksaw ridge is long on a brutal battle that takes place on the blood-drenched battlefields of Okinawa. Shot in Australia, Gibson and his scripters Shenkkan and Knight create a narrative that embodies all that the United States strives for, particularly in the light of the Trump era.

Andrew Garfield succeeds in the leading role of a gentle but decent man who is first seen as a weak coward who adheres to his pacifist principles, but who later goes on to achieve greatness in battle eschewing violence: he will not carry a gun due to his religious beliefs as a Seventh Day Adventist. In reality, Desmond Doss came from a poor and dysfunctional background in rural Virginia but was keen to join the war effort believing he could do so as a medic. Naively believing he would go straight to the battlefield in a white jacket and stethoscope, it soon emerges that training and combat is part and parcel of the war effort.

At home in Virginia, Doss Senior (Hugo Weaving) is a hardbitten alcoholic and First World War veteran who balks at the idea of Desmond enlisting. But a childhood accident, where Desmond nearly kills his brother, has made a big impression and he is determined to avoid conflict. When he enlists for Pearl Harbour he comes across initially as a pain in the neck by upholding his stringent religious scruples. This premise is clearly going to set the men from the boys in the abuse he receives from his comrades (Sam Worthington and Vince Vaughn) that leads to a ludicrous court martial on the grounds of his refusal to bear arms and undergo the requisite training.

But when he gets to the battlefield his true grit emerges, as limbs are blown off and blood gushes in some startling combat sequences, filmed by DoP Simon Duggan and edited by John Gilbert, this is a heartfelt and inspiring action drama that will leave you upbeat and in a positive frame of mind about the power of peaceful conviction.. MT