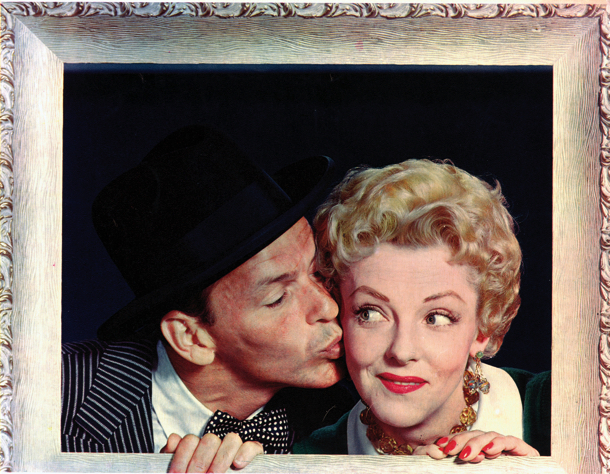 GUYS AND DOLLS had premiered on Broadway late in 1950, and was a great success. It was no great surprise then that MGM bought the rights but much controversy was to surround the casting. It was Joseph L. Mankiewicz’s first musical and Gene Kelly was the first choice for the role of Sky Masterson, but MGM refused to loan him to Samuel Goldwyn. And Frank Sinatra, who had coveted the role of Sky Masterson, had to give way to Marlon Brando, grudgingly accepting to play and sing Nathan Detroit. Mankiewiecz justified his selection, keeping the two head-strong stars apart during the shooting, no small feat considering the volatile temperaments of his two leading men.

GUYS AND DOLLS opens on a very busy day for gambling in New York with all the hot players in town. Nathan Detroit (Sinatra) has to come up with $1000 to find a suitable venue for a crap game which will bring him a very decent profit. But that’s not all: having promised Miss Adelaide, a show dancer and his fiancée of 14(!) years to marry her, he is supposed to keep his word the next day – and there will be no excuse, since Adelaide had invented not only a marriage but five children for her middle class family in Rhode Island. Enter Sky Masterson (Brando), a man who has never lost a bet. Nathan does not need much time to ensnare Sky when they meet: he bets Sky that he could not entice a certain young woman to follow him for a nightly trip to Havana. Sky accepts the $1000 wager, but is not so confident any more when Nathan points out the lady in question: Miss Sarah Brown (Simmons), a strident Salvation Army officer, hell bent on converting any person on earth to live a clean life. Needless to say Sky succeeds, but what kind of woman – even one as smitten by Sky as Sarah was – would like to be the wager in a bet?

Simmons and Brando developed a palpable chemistry on the set (they had worked together on DESIRE a year earlier), and whilst Brando’s voice was not in the same class as Sinatra, he still managed well enough. The Adelaide/Nathan relationship is equally believable, helped by the fact that Blaine had starred in the original Broadway production. But somehow the leads are sucked into the colourful and ever-moving production, which seemed never to stop. The audience is not allowed to rest for a second – very impressively, considering the running time: two and half hours flying by. Camera work is impressive, always finding new ways of showing off the magnificent set and the dancing crowds who mill in and out of the picture. Thanks to Harry Stradling Sr’s skilful cinematography the audience is unaware that GUYS AND DOLLS is actually played out on a giant studio set – a wonderful kaleidescope of colours and movement with quiet a few smouldering moments between Brando and Simmons. Costume designer, Irene Sharaff ‘makes great use of vibrant colours that complimenting the technicolour process and her innate understanding of movement in creating Sarah Brown’s costumes really showcase Jean Simmons’ superb figure and dance moves to great effect. The best Sachertorte with marshmallows you will ever get without putting on weight. AS

ON GENERAL RELEASE FROM 19 December 2014