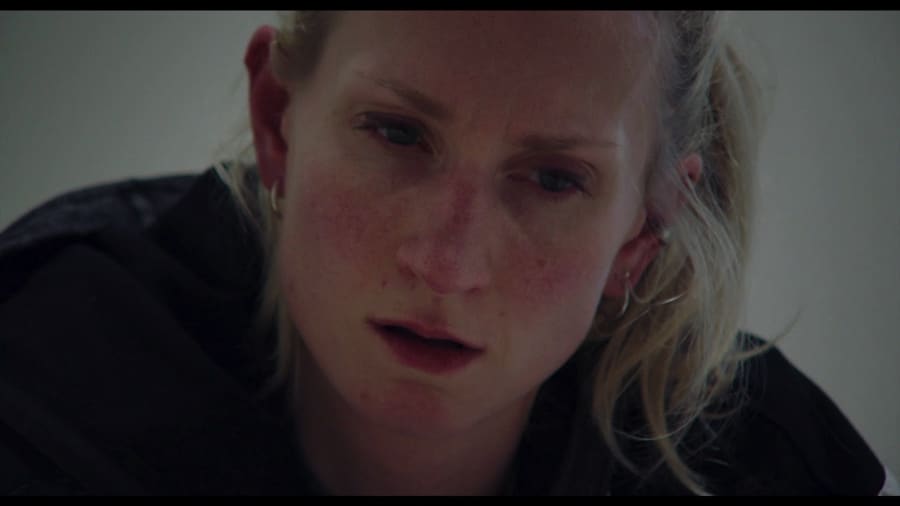 Gritt is slowly losing her mind and that’s a feeling many of us can appreciate as we languish in lockdown. Premiering at Rotterdam International Film Festival her story, Gritt, is the focus of first time Norwegian writer/director Itonje Sømer Guttormsen whose portrait of a desperate actor trying to combat feelings of failure by connecting with others through her art. Sadly though, Gritt is her own worst enemy.

Brigitte Larsen really shines in a standout performance as the titular Gritt, based on Guttormsen’s 2016 short film Retrett. We first meet her describing herself as an “undercover support person” in the play described as “3 Colours Ibsen” This involves looking after Marte (Goksoyr) an actor affected by Downs Syndrome, who actually appears to have a better handle on her life than her helper, and has written two books for a major publishing house.

Discussing the rest of the cast, Gritt is drawn to the male actors with a ‘soft’ personality, Marte preferring rough and ready types, like the crime writer Jo Nesbo. But then Gritt nearly falls out with Marte who is far more easygoing about things in general.

Gritt wants to write and perform a play about the end of “patriarchy and capitalism” – but she has no idea how to realise her project. Then she she meets up with a group of actors claiming to be the famous “Living Theatre”, but they are amateurs, just like Gritt.

Next she meets Lars, the director of “Theatre of Cruelty”, who wants to perform a play about the ‘symbolic nature of plastic bags’, which were a sort of currency for Polish women in the run up to 1989 (when the country completed its post-communist transformation) – although this means nothing in the West. Gritt tries to wheedle herself into the project, and soon finds herself sleeping in the theatre when her aunt Rakel (Soether) no longer needs her to housesit. Feeling sorry for Gritt, Lars offers her a room and a role filming actors during rehearsals. But Gritt has other plans: she wants to perform ‘White Inflammations”, a play about men and the middle classes, and she starts casting from refuge centres, angering Lars, and finding herself – once again – homeless.

Seeing a psychiatrist, she is told to solve her own problems, even though a stay in the ward would have been a better solution. Joining a women’s collective, she again cannot convince them to produce her newest brainchild, the Kairos project, about the biblical figure of Lilith.

Leaving with a stolen jacket, she beats a fast retreat to an old friend in the country, who is married with two children. Again, she misjudges the mood, relating the story of Lillith who “came at night and stole the semen of men” in front of the young girls. Finally Gritt retreats to the lake with her aunt.

DoPs Patrick Säfström and Egil Hâskjold Larsen have a tricky job on their hands to convey Gritt’s mental illness: at first, the dolly camera shows a settled environment, leading us to believe Gritt has a future in the world of theatre. Then comes the switch to handheld, and a gradual loss of control, mirroring Gritt’s own state of mind. Finally, we end up with Super eight home movie images during her stay at the lake. Guttormsen directs with great sensibility, treating Gritt like a child who has fallen into the world of adults. But Brigitte Larsen carries the feature, her face (nearly always neutral) showing no change in her close-ups. Gritt is not easy to watch, but very satisfying in the end. AS