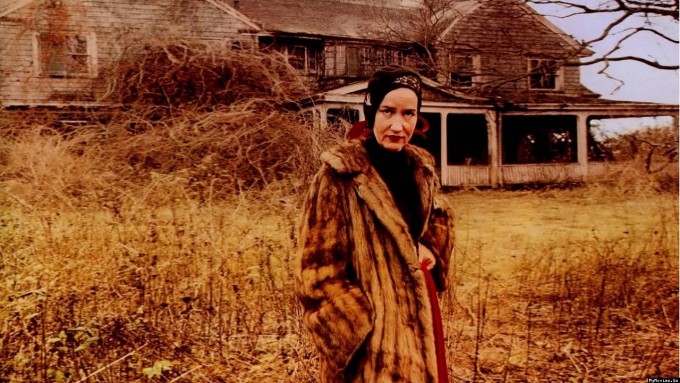 In 1973, Lee Radziwill, sister of Jackie Kennedy-Onassis, invited the filmmakers Albert and David Maysles to a 28 bedroom house in East Hampton to meet Edith Ewing Bouvier Beale and her daughter Edith; respectively the aunt and niece of the widowed First Lady. This film was later confiscated by Radziwill, but the Maysles returned two years later to shoot an extraordinary portrait of two co-dependent women living, by choice, in utter poverty – a real life Miss Haversham and her daughter. “Big Edie” Beale pursued an amateur singer career and had a beautiful voice (we hear her sing), she also claims to have been very happily married with three adorable children – but after 14 years together, she separated from her husband Phelan Beale when little Edie was 14, retaining the big house a block from Atlantic Avenue. Although Jackie Onassis had previously paid for a clean-up which involved, amongst other things, the removal of over a thousand bags of detritis from the Radziwill’s property – which otherwise would have been declared unfit for habitation – four years on, the place is still an unsavoury hovel resembling a set from Whatever Happened to Baby Jane. “Big Edie”s eccentric daughter “Little Edie” (56) is seen wearing a variety of head scarves (due to alopecia totalis) and giving refuge to pet racoons while her pampered cats roams all over the place. After separation, Edie and her daughter became elective dropouts, and continually talk about young Edie’s suitors which purportedly included Howard Hughes and Paul Getty. Their past is wistfully discussed but a not as paradise lost. Young Edie breaks into song and dances frequently and perpetually chants the same rhetorical refrain “When am I going to get out of here?”. Immersion instead of intrusion, the hallmark of the Maysles Brothers works perfectly in this pristine restoration – a portrait of performing artists who made a virtue of their squalor and but failed to avoid fame.