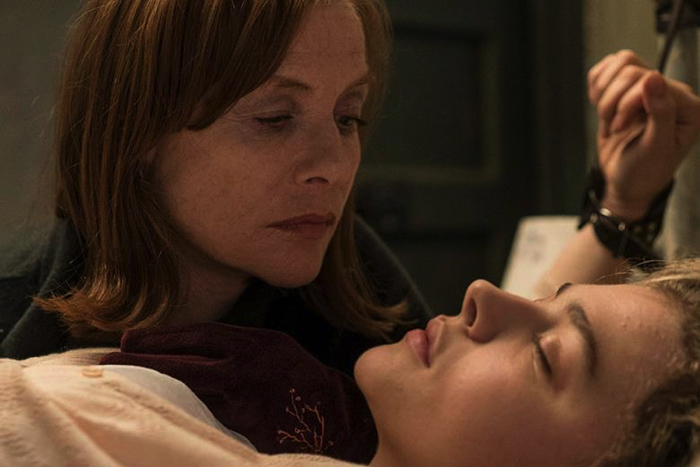 Neil Jordan’s latest drama Greta has the basis to be something much greater, but  chooses the silly route, becoming creepy too soon. Luckily Isabelle Huppert’s blood-curdling turn as a lonely widow saves the day.

Falling between comedy and horror this enjoyable pulp thriller throws a spanner into the works of seriously gripping psychodrama  – instead we get an over-baked absurdist potboiler with one or two electric shocks that will have you screaming out loud. The moral of the story is: one good turn doesn’t lead to another.

Jordan and Ray Wright (The Crazies) have co-written a script that melds Hollywood slickness with European arthouse subversiveness deftly rendered in DoP Seamus McGarvey’s eye-popping visual wizardry, with a small role for Stephen Rea. Chloë Grace Moretz is naive Ivy League graduate Frances who shares a comfortable Brooklyn brownstone with her more savvy friend Erika (Maika Monroe). One days she finds a smart-looking handbag on the subway and duly heads to the home of its owner – one Greta Higed – who inhabits a small secluded house in a Manhattan backwater. A soignée Isabelle Huppert (Greta) opens the door to a cosy French country interior, although it later transpires she is originally from Hungary.

It turns out that well-meaning Frances has recently lost her mother and is feeling isolated emotionally and unhappy with her father’s new relationship. She is instantly drawn to Huppert’s faux bonhomie and the two bond, Greta missing her own daughter, who apparently lives in Paris. A few espressos later they are swearing undying allegiance to each other, all too much too soon. To add further credibility to her caring side, Greta adopts a dear old dog (Morton) on his last legs in a nearby sanctuary. Alarm bells ring. Huppert does her best not to let this descend into a schlocky psycho-scenario but it does, and she knows it, but is having a lovely time with her role. She is also the only woman with normal lips, the others having blown theirs up with fillers. Jordan is having fun with his soundtrack – a blend of classics from Vivaldi to some smaltzy French chansons, just the right background for a ‘girls only’ night in where the femme fatale cooks up some recipes Frances hadn’t bargain for: “Good, no?” says Greta, an evil glint in her eye as she morphs into mean mummy – spouting fluent Hungarian – just to add menace to the mix.

Jordan occasionally makes some bad decisions disrupting Huppert’s subtly crafted character performance and misjudging the mood. One example is the restaurant scene that starts with chilling elegance and is ruined by cack-handed melodrama. Greta is a surprising departure from Jordan’s usual fare and will certainly appeal to the mainstream crowd with its devilish humour and slap in the face thrills. MT