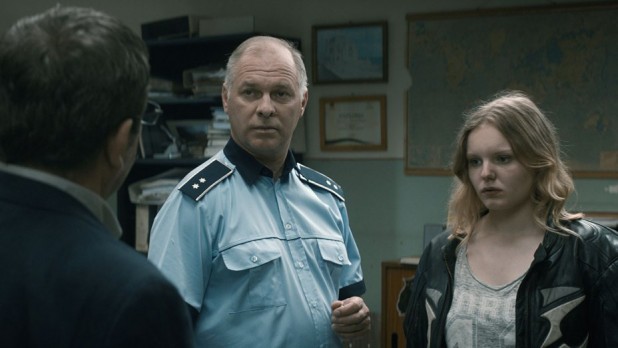 Director/writer Cristian Mungiu’s third film, which won him the Best Director’s Prize at Cannes last year, is a bleak picture of contemporary Romania where the dark shadow of the Ceausescu still haunts those who grew up during a regime.

Dr. Romeo Aldea (Titieni) wants to make sure that his daughter Eliza (Dragus) leaves Romania as soon as possible for a scholarship at a British university. He and his wife Magda (Bugnar) returned to the country from the West in 1991, after the fall of Stalinism, but Aldea has no illusions about the place: living in the city of Cluj and working at the local hospital he is part of a system where bribery , cheating and corruption is a matter of survival. When Eliza is sexually attacked the day before the final examines, she fights off the attacker but injures her arm, which is put in plaster. But the real wounds are psychological: Eliza does not really want to leave for London, she is in love with her boyfriend, a motorbike fanatic, doubling at night as a DJ. Needless to say, that he is seen as very unsuitable husband material by Romeo. Since Eliza needs an average ‘A’ for the results to gain her scholarship, Dr. Aldea is afraid that the incident and the arm injury will put her grades at risk and so hatches a plan to ensure her success but those involved are not as loyal as he hoped, sending his world into meltdown.

This is all as sombre as it sounds with DoP Tudor Vladimir Panduru’s washed-out colours infusing every scene with bleakness, and long, mournful travelling shots in the streets and the run-down estates show the decay. But the real poverty is not just much visible in the environment, but in the souls of the represented by Dr. Aldea. Graduation is, in spite of its length, absorbing with ensemble acting of the highest standard.

Dr. Aldea emerges as a selfish victim, sacrificing himself for goals that are not shared by those around him. He disregards his daughter, belittles her boyfriend, betrays his wife. He sees himself as the loser, but not the perpetrator. GRADUATION is a fascinating indictment of contempo Romania locked in the past, still run by the ‘players’ of the establishment rather than ordinary people. Justifying every move as love for his daughter (who is just a pawn in his strategy), he is very much like the great majority of Romanians ((and many parents of the era), who failed to find a new spiritual beginning after the end of the dictatorship. AS