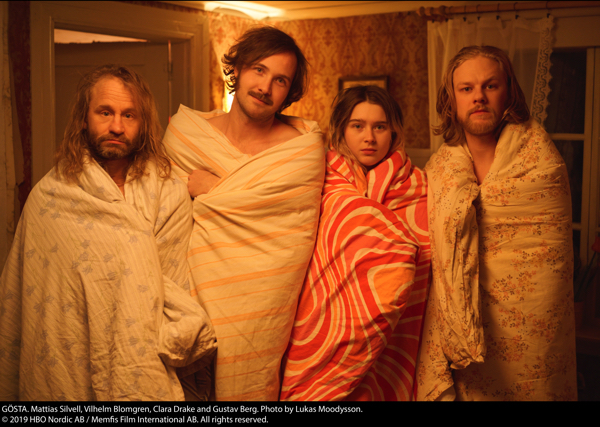 This cinema version of four episodes of twelve-parter for Nordic HBO is a satirical look at modern life and its ups and downs. Written and directed by Swedish cult star Lucas Moodysson who describes it as “a mix of comedy and Dostoevsky” it explores the existential angst of Gösta, a rather insecure 28 year old child psychologist, who is always trying to prove to himself that he’s a better person than anybody else. His ideas collide with real life and real people, and the outcome is usually chaotic.

Gösta (Blomgren) has moved from Stockholm to rural Smaland (where Moodysson grew up), and lives in a rather dilapidated hut with an outdoor shower. He is sheltering Hussein (Fares) who is seeking asylum. But their modest abode soon becomes rather crowded: Gösta’s father (Silvell), a loafer, whose hippy days are long over, has been thrown out by his current girlfriend, and then there is Saga (Christiansson Drake), Gösta’s former patient, who at 18, is not eligible for his support any more. Gösta is always in competition with himself to be a goody-two-shoes, has invited her to live with him. Later a talentless but enthusiastic young composer, along with Gösta’s artist mother, will crowd the place even more. Hussein moves into the attic, unable to bear the noisy arguments any more.

Gösta’a main problem is his love life: girlfriend Melissa Deasismont) is so overwhelmed by his understanding nature (he is foremost a psychologist and not a human being), she keeps called off the relationship. Needless to say Gösta makes an  understanding bedfellow, and when Melissa asks him to be harsher, he puts on two old socks. Then there is Lotta (Carlsson), his co-worker, who is so distraught Gösta ends up in bed with her to keep the peace – although he desperately wants to be faithful to Melissa. But when ‘Papa’ gets a huge German shepherd dog, even the patient Gösta protests.

For Gösta life is psychological journey undertaken with a series of apposite random quotes. But he is unable to help anybody – let alone himself, because he approaches every problem with a textbook. When asks one of his patients to spray can an offensive order on a wall, he reveals his own emotionally immaturity – his adjustment to life is regulated by what he has read and memorised. But he has no feeling for real love, people are just objects he wants to make happy – often make others miserable in the meantime.

DoP Ellinor Hallin has caught the world of this regressive crew in wonderful images, which show a deep nostalgia for the Sixties; and her close-ups are heart-breaking. With Gösta, Moodysson has created a human fossil, which feels uncomfortable in the contemporary, and whose pseudo-altruism is just a cover for indecision and cowardice, camouflaged as learned suffering. But he is only in love with the idea of love – not a real person. Entertaining and provocative. AS