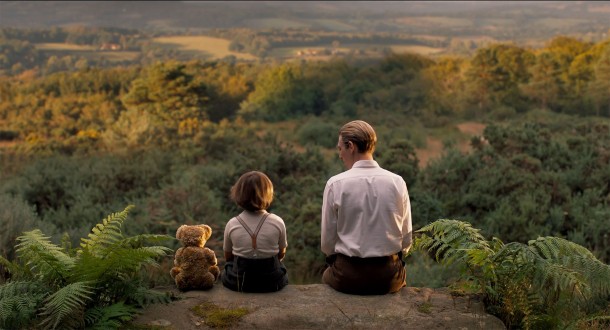 In trying to tackle the complex relationship between Winnie-the-Pooh author AA Milne (1882-1956) and his son Christopher Robin, Simon Curtis (Woman in Gold) finds the guilty party: the boy’s mother Daphne (Margot Robbie). Aided by scriptwriters Frank Cottrell Boyce and Simon Vaughn, Dorothy ‘Daphne’ de Selincourt becomes a garish parody of a woman without a heart; although contradictory evidence found in the adult writing of C R Milne is written out.

Bookended by the two World Wars, the story opens with AA Milne (Gleason) in the West End Theatre scene of 1920, where flashbulbs remind him of his traumatic time in the trenches. Having written for the stage and the magazine Punch, Milne declares “I’ve had enough of making people laugh, I want to make them see”. Daphne had given birth to their son Christopher Robin, named ‘Billy Moon’ by his parents. The couple soon gravitate from London to Hartfield East Sussex, where AA Milne was to write his two most famous books Winnie-the-Pooh (1926) and The House at Pooh Corner (1928), illustrated by the Punch cartoonist EH Shephard (Campbell Moore), who visited the Milnes often and had a close relationship with the author, sharing post traumatic stress disorder.

Daphne is shown as an endlessly neglectful mother, seeking out out the brights lights of London’s social scene while leaving CR in the hands of his nurse Olive ((MacDonald). When Olive is on leave, Milne senior shows off his parenting skills in strange ways: when he finds his son on the table with knife and fork in his hands, he reprimands him “if somebody falls through the ceiling, they would injure themselves, drawing blood” – making sure the audience gets the wartime analogy. After the Winnie-the-Pooh books achieve worldwide success, Daphne decides to get in on the act, making hay out of Milne’s success despite being previously being on the verge of leaving him – she even sells one of his private poems to a newspaper, and gives her son short shrift when he tearfully complains “all these stories are just lies” – she retorts “There is no blubbing in this house”. A sentimental reconciliation between CR, returning from the war, and his parents shows Daphne again at her best: never in film history have you witnesses a mother less delighted by the survival of her son.

The dinner party conversation at the Milne house would make PG Woodhouse proud: Dinner guest: “I was at the Somme”, “How was it?” “Bad show”. Obviously, this only goes to emphasis how the British stiff upper lip kept the sensitive male in check. Clearly Curtis intends this as an indictment of the upbringing Milne’s children’s books revered, but is it really worthwhile, or even desirable, to criticise the values of the past through today’s spectrum? AA Milne is shown trashing his son’s room with a cricket bat, demonstrating that, unlike mother, he really regrets the rotten childhood he had forced on him. Whilst the PD department gets all the credit, GOODBYE is just too sweet and torpid – apart from its misogynist ideology – to keep even the most ardent Pooh fanbase engaged. Years from now this film will be forgotten, the books and poems will live on. AS