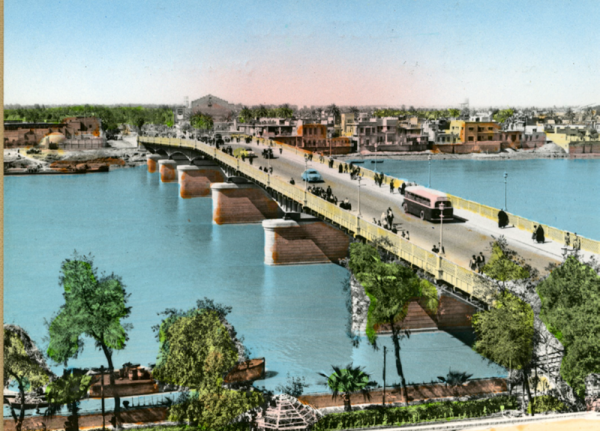 Director/DoP Fiona Murphy (Neither Fish or Fowl) has chartered the history of Jews living in Babylon, then Mesopotamia and now Iraq for over 2600 years. The Babylonian Talmud was written here, and Baghdad was the centre of the Jewish community of the region – in 1917 140, 000 Jews made up a third of the capital’s population but today, only a handful Jews (and one unused synagogue) remain. Murphy has followed Edwin Shuker from North London to Iraq, to buy a house in the city his family called home for centuries.

In 1947, Renee Dangoor was crowned the first Miss Baghdad. Murphy interviews her family, one of the many Iraqi Jews living in London, who share photographs of their middle-class Jewish life in Baghdad after WWII. Since its foundation in 1921, Iraq has had a turbulent history. King Faisal was the official head of the country, but British influence only ended completely after 1932, when the British mandate ran out. Fascist influence in the country grew when the Great Mufti emigrated to Iraq and was instrumental in having Hitler’s Mein Kampf translated. Five years later pro-Nazi forces took over the region for a few months, before Allied Forces arrived. But they stopped short of occupying Baghdad and the Jewish population were targeted in attacks organised by the Grand Mufti, who wanted to unite the Arab world behind Hitler. In the May riots of 1941, 180 Jews were killed, and over a thousand injured.

After Faisal returned later that year, the British entered Baghdad, and the Grand Mufti fled to Berlin. Whilst many middle-class Jews felt safe in Iraq, working class Jews organised illegal emigration to what was then called Palestine. When Israel was founded in 1948, after the partition, the climate for Jews in Iraq changed again for the worse. In 1950 Jews were fired from jobs, their shops were boycotted, and some were hanged. 70 000 emigrated, leaving their homeland with only a few shekels. In 1951 over 120 000 of them had emigrated to Israel, where there were not very welcome: newsreel images show the bewilderment of the Jewish citizens: for them the Iraqi Jews were poorly dressed and “looked like Arabs, people without a culture and even speaking the language of the enemy”. Just 7000, mostly middle class Jews remained in Iraq, but they thrived; one of the interviewed talked in great length about the chocolate factory owned by his father.

There were even Jewish MPs in parliament. After 1956, when Nasser nationalised the Suez Canal, and British forces left, some of the Jewish women wanted to leave, fearing new unrest. In 1958 the Royal family was killed, the military coup brought Brigadier Quasim to power. A Jewish witness stated, that their family, who run an import business for American cars, were afraid that “would have to live like communists”. But instead, the embassies of Warsaw Pact countries and their allies, all bought big American vehicles, making 1951 “the best year for business”. Again, the remaining Jews felt safe. In 1963, with the help of the CIA, Quasim was killed, and his regime was replaced by the Ba’ath Party – a certain Saddam Hussein becoming deputy leader in 1969. Before that, in 1967, the Three-Day War, in which Iraq fought alongside four other Arab countries against Israel, finally signalled the end of Jewish life in Baghdad. Survivors of the exodus to Britain and Israel tell about phones being cut off, one member of the family hanged, and a flight across the northern mountains to the Kurdish part of Iraq. In 1971 just a few hundred Jews remained.

Edwin Shuker had to give up the idea of buying back his family home in Baghdad – it would have been too dangerous. But he did the next big thing, buying a house in the north of the country. “I hope, that in sixty years o so, there will be a Jewish community in Baghdad. Or it will end with me” he say shoulder shrugging. “But I can’t leave the country behind for good”. There is simply too much to leave behind. Taut and informative, Remember Baghdad is a history lesson about little known facts and events, making sad reading. AS