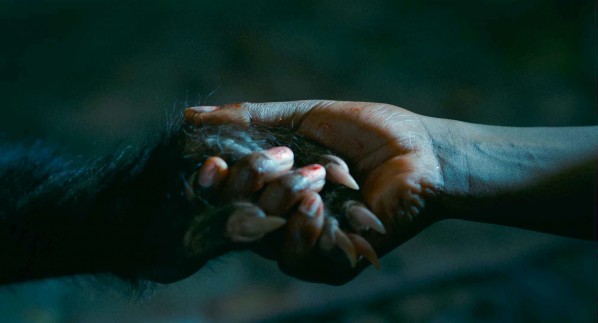 Handling its tonal shifts with a deftness as light-hearted as its female-centric cast Good Manners is another example of the fresh and inventive filmmaking coming out of South America at the moment. It follows a young Black woman (Clara/Isabél Zuaa) who takes a job as a home help for an expectant single mother (Ana/Majorie Estiano) who is a member of Brazil’s privileged ‘nouveau riche’.

Ana spends her time shopping and exercising in her high rise luxury condo that soon becomes Clara’s home. After a sensuous pregnancy massage, Ana starts to trust Clara implicitly giving the woman all her bank details even though Clara fails to produce satisfactory references from her landlady Dona Amélia (an amusing Cida Moreira). Alarm bells ring, but it soon emerges that Clara is not the one to be wary of. Ana has some pretty strange secrets and bizarre habits which are gradually revealed in this rather slow-burning drama enriched by clever use of hand-painted scenery for the backdrop of Sao Paulo, and pleasant musical interludes to tell its beguiling story.

Clara and Ana soon enjoy a tender relationship that is refreshingly free from jealousy or resentment. One night they kiss so passionately that Clara’s lips bleed. This signals a growing intimacy between the two that is not so much a  a lesbian awakening, as a growing closeness and dependency due to Ana’s vulnerability that feels entirely natural in her current state. This is another clever way of signalling sexual fluidity, but something more unsettling then starts to take place when Ana scratches her companion’s shoulder, again drawing blood.

Ana’s backstory is clearly a troubled one and she is saddened by the recent break with her family who continue to finance her life, despite “a mistake” on her part which remains a mystery but appears – in delicately rendered pastel drawings – to involve a one-night-stand with a rather hirsute cowboy lover. Clara is enchanted by a musical box containing a tiny dancing horse that plays a tune that will haunt the rest of the film. Then Clara discovers large hunks of meat in the ‘fridge and, during the Full Moon, Ana sleep-walks into the street, her eyes turning a ghastly yellow. When Clara follows her one night she is terrorised to find Ana killing a cat and drinking the blood.

All this seems to unfold without sensationalism, the directors handle the blend of genres with graceful aplomb making this feel more like a fairy story rather than full on horror fare. Ana’s horrific gory birth scene takes on Alien proportions but the alien here is a rather sorrowful baby werewolf – and we feel for him, rather than fear him. With Ana’s death, Clara moves back to the poverty of her favela – cue musical interlude – again, more like a scene from Les Miserables than true Brazilian favela squalor. The little boy Joel is adorable, even when he transforms to a tot werewolf during the full moon when he is taken to ‘the little bedroom’, a secure place with chains and fluffy toys.

All in all, GOOD MANNERS is graceful, softly crafted horror movie that has more in common with ‘Jackanory’, with its brightly coloured ‘beanstalk’ garden, than the terror inspired by Lon Chaney’s werewolf outings, but it nonetheless exerts a thrilling tension. Rui Pocas’ cinematography evokes vibrant images in the interiors and the CGI used for the transformations is just about convincing. Ultimately a story about the power of a mother’s transformative and unconditional love rather than a tale of destruction and woe. If there’s one criticism, GOOD MANNERS rather outstays its welcome at 135 minutes, but certainly hooks us into its spell until the grand finale. MT