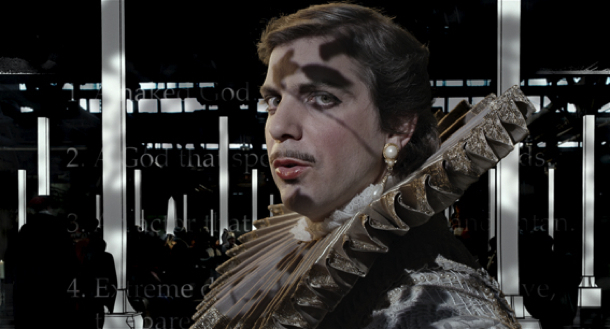 Goltzius and the Pelican Company (2014) 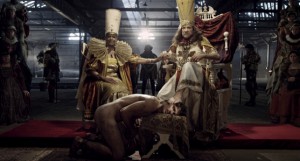 In continuing his staged lectures about painting, theology, printing and everything else worth quoting, Peter Greenaway has turned to the Dutch printer and engraver Hendrik Goltzius, who between 1577 and 1617 was famous for his engravings of biblical and mythological scenes. Whilst the real Goltzius was travelling in 1590 from  Italy via Germany, Greenaway imagines a visit to the court of the Margrave of Alsace (Abrahams), where Goltzius (Nasr) sells the wealthy patron of the art six tableaus of sexual perversions (voyeurism, adultery, child abuse, incest, prostitution and necrophilia), based on biblical themes, and staged by his printing company and their wives – plus a promised active participation of the permanently randy Margrave, who is also fond of taking a public shit every day.

What follows is the usual Greenaway treatment of digital trickery, particularly superimposed images of Goltzius, commenting on the actions like a second-class newsreader with a very fake French accent. The other actors follow his lead, they ham their way trough the proceedings, speaking their texts without any passion, like prompted. And yes, there is sex, actually lots of it, but it is mechanical like the rest of the proceedings. Greenaway throws in some theological debates between a Calvinist, a Roman Catholic and a Rabbi, succeeding in taking proceedings even further away from anything resembling a film. The schematic characters are as dead as wordy – emotionless and distant, they resemble very much the soul- and heartless director of this exercise, which (again) has only been undertaken, to show that Peter Greenaway is really the most cleverest person on earth.

The settings of Margrave’s court in a large industrial hanger work very well, as does the neo-baroque music, which helps to wile the time away, and the architectural drawings are (as usual) brilliant. Greenaway has even taken a step back from Nightwatching, totally falling back on a self-indulgent and pure sensationalist style. But his sex scenes, including gay rape, might have been challenging in the 70s, but today they are only proof of the director’s age. And no matter how impressive the sets, costumes, lighting and special effects are, they can never make up for the lack of any narrative. This is a peep-show, a row of cabaret numbers, staged for the benefit of the director alone, who tries in vain to come even near to his only true film, his debut The Draughtsman’s Contract. “Goltzius’” contract, in contrast, is just the work of a culture vulture. AS