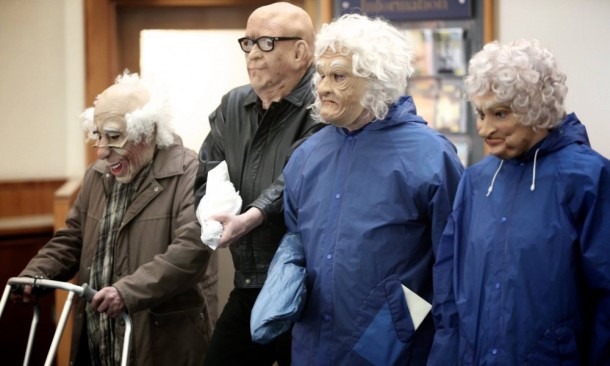 GOLDEN YEARS may have slim appeal to a certain sector of the community who it cynically pictures long-retired and living on the outskirts of otherwise decent such as Wigan or Uttoxeter. Like a Woolworth’s pick ‘n mix GOLDEN YEARS is certainly cheap and cheerful and full of artificial flavours, but even Woolworth’s eventually acquired cult status, a tribute unlikely to be given to this flaccid comedy. It features a talented cast of well-known British actors who do their best to flog what feels like a proverbial dead horse by its cretinous denouement. Philip Davis; Bernard Hill, Simon Callow, Virginia McKenna, Una Stubbs and Sue Johnston all do sterling work to bring a certain charisma to a vacuous 96 minutes of entertainment.

Not so the script. co-written by director John Miller, Jeremy Sheldon and DIY SOS frontman Nick Knowles, it trips lightly through a thousand cliches, suffering middle age spread and then sinking into oblivion by its flatulent finale. Billed as a crime caper, the implausible storyline re-works the theme of financial crisis where Bernard Hill’s Arthur finds himself without a pension and his wife Martha (a game and still resplendent Virginia McKenna) invalided and requiring expensive medical care. Their limited social life revolves round the local club which is threatened by closure due to a bid from the developers. Then Arthur discovers a get rich quick scheme; a cunning plan to rob High Street banks from the unlikely cover of an innocuous-looking caravan, financed by his first hawl of swagger, and parked nearby. Consoling himself that his Robin Hood approach to re-financing is somehow acceptable, due to general feeling of animosity towards the banking fraternity, he manages to spin things out until Martha wises up after an unfortunate incident, and the two decide to garner support from their friends for a final heist. These willing accomplices include metal worker Brian (Philip Davis), policeman Sid (Alun Armstrong) and rambunctious bore Royston (Simon Callow) -amongst others. Whether the film is intended to be tongue in cheek – or just seriously misjudges the mood of today’s more mature filmgoer – is unsure. But GOLDEN YEARS feels like a poor re-working of a Carry On film minus the laughs and the charm, and with moments so toe-curling, they will make you want to curl up and die. MT

OUT ON GENERAL RELEASE FROM TUESDAY 29 April  – in over 108 Odeon Cinemas Nationwide, Scotland & Ireland from 29 April