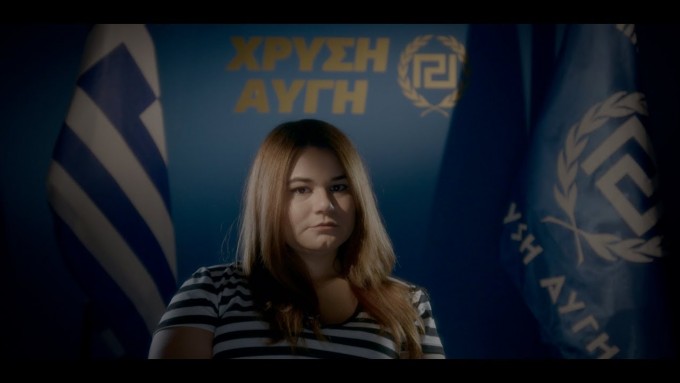 Harvard Bustnes’ portrait of three women whose men are leading politicians in the neo-fascist Greek Golden Dawn Party, is illuminating, but also very frightening. The trio exemplifes good PR in motion as they work tirelessly, using all the tricks in the book to convince and cajole – not only the filmmaker, but also the Greek electorate – into believing that their party is the victim of corrupt democracy, while hiding the fact that they want to replace democracy with a Fascist state, built on the Nazi model.

Eugenia (Jenny), Dafni and Ourania represent three generations of woman: Jenny is the wife of Greek MP Giorgos Germenis, a former metal bassist and baker, who was rewarded for 18 years of service to the party with a seat in Parliament in the 2012 elections. Jenny is a platinum blonde, whose no-nonsense approach could give her a successful career as an estate agent. Dafni is the white-haired mother of fellow MP Panagiotis Iliopoulos. She plays the role of the family carer, rallying her grandchildren in on the act, as they run around with toy weapons. Even a priest and friend of the family, joins in the game of throwing grenades.

Dafni accuses the government of perpetrating a national genocide: “The government wants us to disappear, like the Incas. One day, there will be no more Greeks. But we have the blood of the old Greek heroes in our DNA”. Nevertheless, even on TV, she is able to formulate what will happen next with their political enemies: “We will drink their blood with a straw after the elections”. When the left-wing rapper Pavlos Fyssas is murdered by a crowd of Golden Dawn supporters, neither Jenny, Dafni or Ourania want to discuss the incident. Ourania is a postgraduate psychology student, animal lover and Disney fan, the Little Prince is one of her favourite book. She is the daughter of founder and party leader Nikolaos Mihaloliakos, who finds himself in jail with the majority of the Golden Dawn MPs, after weapons are found in their HQ. But she finds nothing wrong with party member Ilkias Kasidiaris, who still supports the Colonel’s Fascist dictatorship (1968-1974), and hits a woman member of the Communist Front three times in the face during a life TV debate, having assaulted another woman from the Radical Left. The Golden Dawn women get very active during the election campaign of 2014, since most the men are in jail. But after their release, the trio step back from the front line, retreating into the shadows of their husbands, fathers and sons.

Only once do the women show their true colours– after watching marching party members singing “Communists, you will be turned into soup” and “Fuck the Jews”. Asked by the director, who they hold responsible for the Greek crisis, the old chestnuts come out: “The Protocol of Zion. It is a universal conspiracy. The Jews change the government, even in America.” After being reminded, that Obama is not Jewish, the conspiracy theories go on “The Jews choose people, give them money and trap them with blackmail, and use them as puppets”.

DoPs Lars Skree and Viggo Knudsen follow the rapidly changing locations, and often get a little glance in, after the door is shut, because some Party meetings are off limits. Bustnes tries to the very end, to get a disclaimer from the women, but they will never admit that they or their men are Nazis, even though video and photographical proof is there. To the end they play the game of denial, seeing themselves as victims. It goes without saying – Golden Dawn Girls is a disturbing look at modern politics. AS