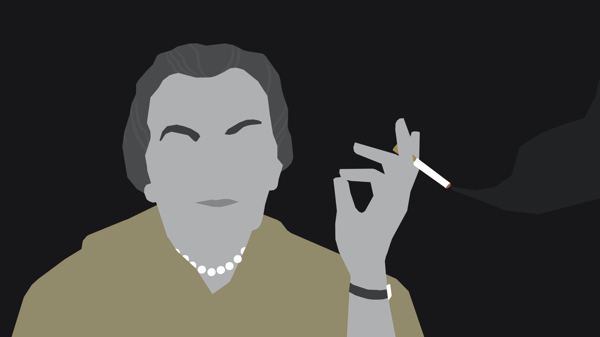 This new biopic on Israeli Prime Minister Golda Meir is based on a recently discovered interview from 1978, done just before her death. It tells the important story of her time in office – from her surprising rise to power to her lonely demise. And although the Israeli State TV channel  and the interviewee maintain this meeting was “off-record”, both parties must have been aware that the recording equipment was working.

The trio of directors – Borenstein, Nir and Rozanes (Uploading_Holocaust) – have decided to play it fair and let Zivi Zamir, ex-boss of the Mossad, do a hagiography of Meir. But the former MP and peace activist Uri Avneri can barely hide his contempt for the ex-premier.

Born in 1898 in Kiev (then the Russian Empire) Golda Mabovitch emigrated with her family to Milwaukee in the USA at the age of 8, before settling with her husband in Palestine, a British Protectorate, in 1921. She joined the Hisdadrut, a union movement, before making a quick career in Mpai (later the Labour Party), serving as a Minister for Labour (1949-1956) and Foreign Secretary (1956-1966), before becoming Prime Minister in 1969, beating rivals generals Moshe Dayan and Yitzhak Rabin. Her premiership coincides with the mass immigration of Jews from North Africa and the Middle East. Meir, an Ashkenazi Jew, could not relate to the culture of these new citizens, the latter founding the “Black Panthers”, that rose up against the lack of opportunities in Israel and were unable to establish any common ground during their meeting with the premier. Avneri complains about Meir’s lack of understanding of anything Arab, he nearly goes so far as calling her a racist. On the other hand, Zamir is full of praise for Meir, particularly for letting him and his Mossad organisation off the leash, in hunting down the “Black September” cell responsible for the murder of Jewish athletes at the Munich Olympics in 1972. The Yom Kippur War of 1973 signalled the end of Meir’s political career. She had been seen as “The Mother of the Nation” but 3000 dead soldiers were too much for a public who could only contemplate glorious victory on the battle field. Although Dayan and the other generals had played down any threat of an attack, Meir was more tuned in to an impending disaster. And she turned out to be the main culprit. With her health deteriorating – one photo shows her having chemotherapy whilst still smoking – she eventually threw in the towel in 1974.

Golda Meir is somehow symbolic of the trouble Israel finds itself in today. With Avneri rightfully criticising her policy of opening up the building of new Jewish settlements in the West Bank, Meir was one of many politicians who made it now near-impossible for a two state solution to be found. And when president Anwar Sadat of Egypt offered her peace talks in 1971, she refused. Worse, when Premier Menachem Begin invited Sadat to Israel in 1977, which amounted to a de-facto recognition of Israel by an Arab state, Meir was cynical: she told journalists that Begin and Sadat deserved the Oscar – not the Nobel Peace Price for their Camp David accord. Golda Meir was a strong woman in a man’s world – no doubt about it – but she shared a long-time strategy which relied only on continuous war with most of her male competitors.

Borenstein completes his engaging portrait of one of the first woman PMs ever with archive footage and photos. Eitan Hatuka’s pertinent images reveal the truth behind Avneri and Zamir’s body language,  Thankfully, the directors leave the audience to make their own judgement. AS