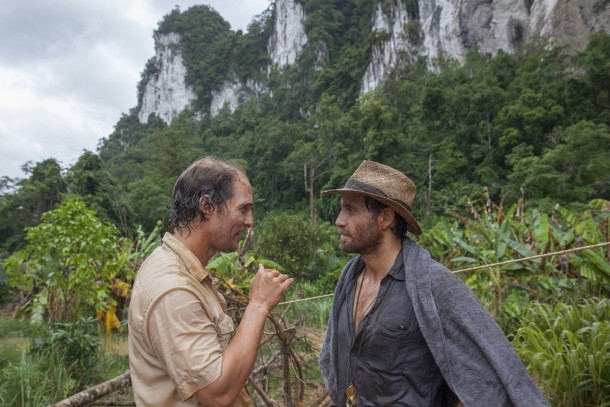 “Inspired by true events”, is the old chestnut that warns us to be deeply sceptical about Stephen Gaghan’s ambitious attempt at boys own adventure with a financial thriller in his latest drama GOLD.

The perfect vehicle for Matthew McConaughey to play a traditional Southern oilman armed irrepressibly pioneering for the American Dream, it sees him break out from the confines of his father’s mining company to forge a booze-soaked path to hell and high-finance when he bets his bottom dollar and joins forces with the legendary geologist and copper striker Michael Acosta (Edgar Ramirez) to forge a precious metal venture in the wilds of Indonesia.

As Kenny Wells, McConaughey cuts a comical figure, half Hottentot, half orangutang, striving with a genial gusto that impels him forward to keep panning for gold, despite numerous setbacks, and a narcissistic self-belief that sees him continually coming up smelling of roses, despite smoking a cartload of Marlboros on his indefaticable journey to the dream. But despite this ebullient tour de force and a gilt-edged ending, the film falls flat around him, largely due to an overly episodic and scatty script by Patrick Massett and John Zinman.

GOLD is a story rich in dramatic elements: an amiable opening in early ’80s Albuquerque, where Kenny courts his sweetheart Kay (Bryce Dallas Howard) while working for the family business,Washoe Mining, father Craig T Nelson), an economic down-turn where Kenny scrapes the barrel and loses his home and is reduced to living in Kay’s flat-pack villa; an exciting interlude in the steamy jungles of Jakarta where the prospecting story deepens; and the lustrous lure of Wall Street where their discovery hits the dealing rooms. What transpires is a muddled mess, where even the score with its inappropriate hits has us confused and uninspired. (what has Iggy Pop got to do with gold mining or Wall Street for that matter). Bewildering too, is a series of flash-forwards to an interview with Kenny and an mystery interrogator (Toby Kebbell), which intends to elucidate but actually leaves us in the dark. Despite all this, GOLD is strangely enjoyable and entertaining –  rather like a piss-up in a brewery; you’re not quite sure what’s happening next, but it seemed fun in the afterglow, largely due to McConaughey and his antics. And although his character lacks impact, emotional integrity or intelligence there’s an authenticity to his relationship with Kay. And, in this end, his self-centredness is what really saves him. Kenny is not a selfish man, but his narcissistic self-regard prevents him from actually seeing the truth of the situation. Acosta is a man of few words who remains a cypher and a dark horse until the final denouement.

Corey Stoll’s New York investment banker is well played and Kenny’s flirt with Rachael Taylor’s City femme fatale provides relief but this is very much a one note film with few dramatic peaks and troughs despite the dramatic possibilities. Gaghan direction is uninspiring with the use of split screens feeling rather ineffective. The jungle scenes, filmed in Thailand are the most visually entrancing part of a drama that somehow fails to in impact despite its energy and potential. MT