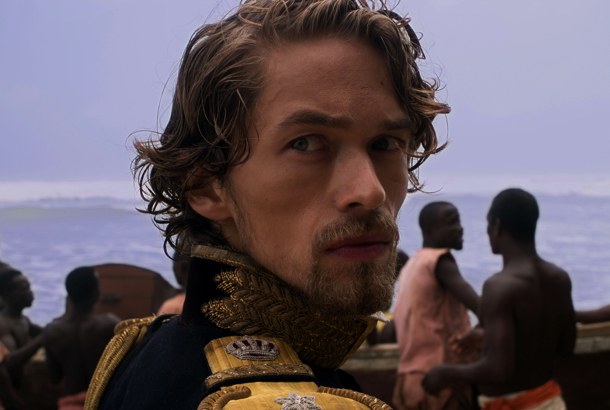 With his tousled pre-Raphaelite locks and suave accoutrements, Wulff (Jakob Oftebro | Kon Tiki) is the decent but ‘wet behind the ears’ botanist who, having been granted a slice of the plantation action by his Danish King, swashbuckles into a moral morass when he discovers that the faceless natives are not only unfriendly but also recalcitrance at being beaten, oppressed and even raped by their colonial masters on the plantation.

In flashback we see him enjoying the carnal delights of his fiancee with whom he hopes to be reunited back in the fatherland after a year or so of sewing his seeds and building his empire in this brooding heart of darkness: where it emerges that things are far from as idyllic as gorgeously lush visuals would have us believe. And despite Angelo Badalamenti’s funkily romantic score, the script leaves a great deal to be desired as Wulff is prone to filmic episodes of plant-inspired navel-gazing and day-dreaming, frequently departing from the Colonial storyline of running a business, making this period drama feel rather lightweight albeit pleasurable from a visual point of view.

There is plenty of interaction between Wullf and his young slave boy, Lumpa (John Aggrey), but the story drifts through hallucigenic scenes involving local flora but it doesn’t seem to take us anywhere meaningful until it emerges that a tribe called the Ashantis have gradually desimated his growth potential plantation-wise. Being a plantsman and pacific, Wullf embarks on a conciliatry route to solve his problems emloying the aid of a local merchant to seek a humanistic solution. Dencik has made an ambitious debut with this absorbing and unusual approach to Danish Colonial history. MT