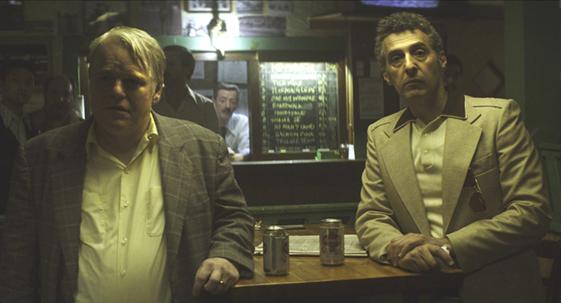 The South Philadelphia neighbourhood of God’s Pocket, depicted here in John Slattery’s debut, may be a poor and depressing, but it’s honest and God-fearing. This is where Mickey Scarpato (Philip Seymour Hoffman lives with his wife Jeanie (Christina Hendricks) and her son Leon (Caleb Landry Jones), an insipid loser who has so few friends amongst his co-workers at the local junk-yard that when he threatens one with a flick-knife and gets a fatal head wound in retaliation, no one is disappointed. And when the police arrive on the scene, everyone swears blind it was an accident. But his histrionic mother will have not of it and forces her unlucky husband to ask around for clues and cash to afford a decent burial.

A rich vein of black humour runs through this close community of Italian and Irish blue-collar workers, drunks, hustlers and bottom-feeders: it doesn’t seem to matter what you do (steal, cheat, or even murder) – as long as you’re from ‘The Pocket’ – you’re safe amongst your own. Mickey is an outsider but part of the Pocket by marriage and he understands the status quo and hangs out with the best of them; gambling and drinking in the Hollywood bar. Trading in meat, his refrigerated van is home to stolen carcasses and a good deal more. But celebrity journalist Richard Shelburn (Richard Jenkins) a burnt out intellectual, doesn’t belong and although he’s championed the community and knows how to depict these hard-working denizens in the newspaper, he misjudges the mood when he’s called in to ‘investigate’ the crime he falls foul of the locals, offending them with his phoney, working class diatribe (‘Simple men, who rarely leave)”. And especially when he crosses the boundary with Jeanie.

John Slattery (of Mad Men fame) bases his impressive first feature on an eighties novel by Peter Dexter (The Paperboy). It’s a witty and well-written affair, richly textured, cleverly lensed in seventies style (by Lance Acord) with a gripping storyline and characters that ring out with rare authenticity.

Among the performances, Christina Hendricks is appealing as a sexually dutiful wife and doting mother and Philip Seymour Hoffman excels in a paunchy portrait of a small time hustler who is forces to do the right thing but feels little inclination or real joy in his life. John Turturro and Joyce Van Patten are unmemorable but Caleb Landry Jones is strong and unsettling as the spoilt son. Here in God’s Pocket, the community is a religion that supports a godforsaken people who have little else to support or really sustain them; a brash world but not an entirely unfeeling one and there are moments of comedy in the bleakness such as the undertaker (Eddie Marsan) who spills beer on the corpse.  This is a place with little to recommend it and characters you would probably rather not know, but it’s a world with a heart that keeps on beating despite the odds. MT