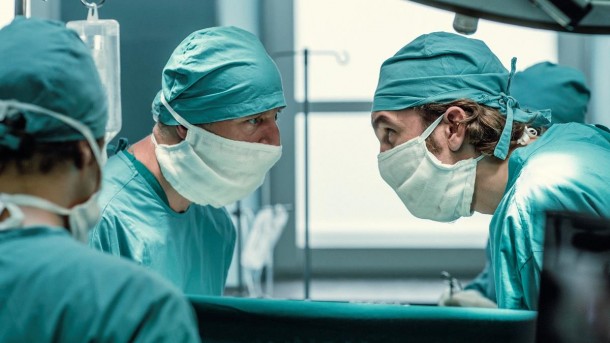 The ‘Gods’ of the title are three Polish heart surgeons who, under the leadership of maverick Dr. Zbigniew Religa (Kot), performed the first heart transplants in Poland in the mid-80s. Palkowski portrays Religa as a rebellious rock star rather than a stuffy medic; the unrelenting tempo of GODS matching Religa’s unrest.

We first meet our ‘hero’ in a Warsaw clinic hemmed in by bureaucracy and an entourage of flaccid colleagues, reminding us that medicine is run by traditionalists, whatever the country. When Religa saves the life of the son of a party official, on the pavement in front of the hospital (by extremely unorthodox means), he is given more freedom to flex his muscles. After loosing a teenage girl on the operating table, Religa and his colleagues Zembala (Glowacki) and Bochenek (Warszawski) re-locate to the provincial Silesian town of Zabrze where they are promised a ‘state of the art’ venue to perform heart transplants. But when they get there neither the operating theatres nor the funds are available. Religa doesn’t give up. Rather than returning to his long-suffering wife Anna (Czerwinska) in Warsaw, he commandeers a gang of new nurses to kick-start the building works; tricks the local party officials into giving him the grants; and performs in 1985 the first heart transplant on Polish soil.

Palkowski creates a sort of Wild-West atmosphere in Zabrze; everything seems possible for the chain-smoking Religa, who is as egoistical as he is daring. Driving like a bat out of hell through the countryside, he hires a dissident doctor and fights the secret police: he is an old-fashioned hero in the Errol Flynn mould: gung-ho and uncompromising; tough on himself and everyone around him; taking the medical establishment by storm; disregarding the rules and making his own.

The real Dr. Zbigniew Regila (1938-2009) went into politics, ran for president and was Minister for Health between 2005 and 2007. Whilst the laws of (political) reality are often stretched, the sheer panache of Regila and his crew keep us glued to the screen. Piotr Sobocinski’s camerawork is as vivid and innovative as the good doctor, and we’re rooting for him with bated breath as he overtakes everything on the road. The rest of the ensemble cast matches his manic enthusiasm, apart from Religa’s wife Anna (Magdalena Czerwinska) who sacrifices her career for her husband, in the only downside of this tour de force story. AS