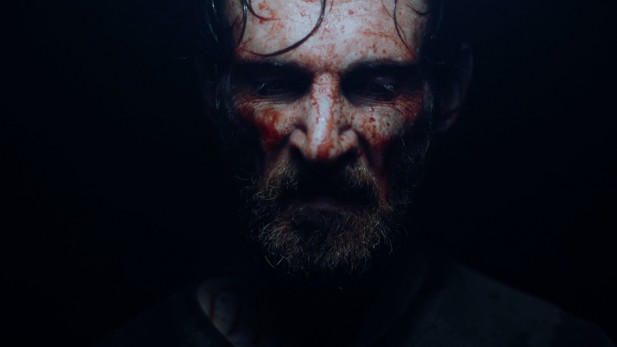 In J P Davidson’s cinematic low budget mood piece, an amateur property developer Malcolm (Matthew Jure) owes his childhood friend Sonny (Richard Pepple) a chunk of money – £6000 to be precise. So all he needs to do is renovate his dilapidated London flat and release some capital on the resulting sale. Simple really. But his life has spiralled out of control and debt and alcoholism have overtaken his mind and started to play tricks on him, particularly when he starts to imagine a secret wall in his property.

In a triumph of style of substance, GOD’s ACRE is shot in shades of grungy gunmetal with a stealthy soundtrack from debut composer Christopher Campbell. Davidson’s film looks superb and feels unsettling at it explores the nooks and crannies of a man’s home and then the inner sanctum of his claustrophobic mind as he glides aimlessly through a former existence that no longer works in the scheme of things. Enter the nurse, his noctural neighbour whose down to earthiness is the polar opposite of Malcolm’s instability and this could be the start of something interesting. GOD’s ACRE feels like an extended short: long on atmosphere but short of a really gripping narrative. Not only is Malcolm vapid as a central character, but he is also unappealing. In short, he is a cypher who drinks a great deal, rants and wanders around in this plotless and rather pointless psychological drama. MT