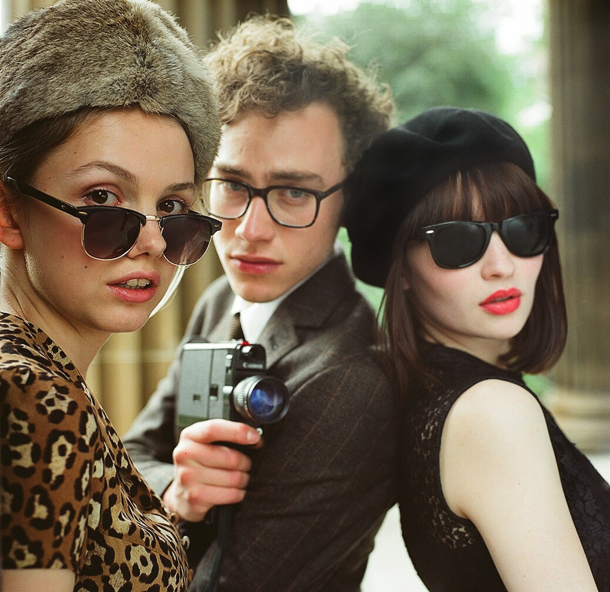 Best known as lead singer of the indie band ” Belle and Sebastian” Stuart Murdoch turns his talents here to filmmaking with a sparky little Britflick GOD HELP THE GIRL. Far from perfect, it’s a moving piece of drama, despite a slim storyline. Three young wannabe-be musicians spend a glorious summer in Glasgow, trying to fill in time before adulthood. This might seem unoriginal, but they sing and dance around the city in the spirit of a Jacques Demy film: his stories were never particularly original, but they also grabbed you by the heart, and his colourful city backgrounds of Cherbourg or Rochefort, were pure fantasy. Murdoch’s Glasgow evokes the same magic, but the charm lies in the details.

Eve (Browning), suffering from anorexia and depression, absconds from hospital at night and tries to kick-start her life as a musician. She meets the guitarist James (Alexander) at a concert, where he fights with the drummer. James introduces Eve to Cassie (Murray), a posh girl in whom he tries to instil the basics of music, but Cassie finds Eve much more interesting, and soon they roam the city on foot, bike or in a canoe. On forming a band, Eve has a relapse and has to go back to hospital, but finally success arrives (sort of).  In the same style as Demy, Murdoch chooses a bitter-sweet ending.

Much of the success is down to the actors: Browning’s Eve hiding her rather steely interior behind a helpless-little-girl persona, but living by her wits. James is just the opposite: he seems to be the leader of the group, but it becomes soon clear that he is only too happy to stay in this in-between stage for the rest of his life. He is an avoid ant; fearful of testing himself, personally and professionally. No wonder Eve sleeps with Anton, a French singer, who turns out to be an arrogant bastard. Cassie is the most earthly: she knows that she can always fall back on family money and connections, and enjoys herself as much as she can: this is her gap year.

The camera creates a dream world in Glasgow: vibrant and colourful, glossy and full of surprises. And it’s a fantasy life the trio creates for themselves; a background invented to suit their needs: young and romantic, far away from the adulthood, which awaits them round the corner. And when Eve and Cassie perform a dance duel with umbrellas, you HAVE to fall in love with GOD HELP THE GIRL – for Demy’s sake. AS