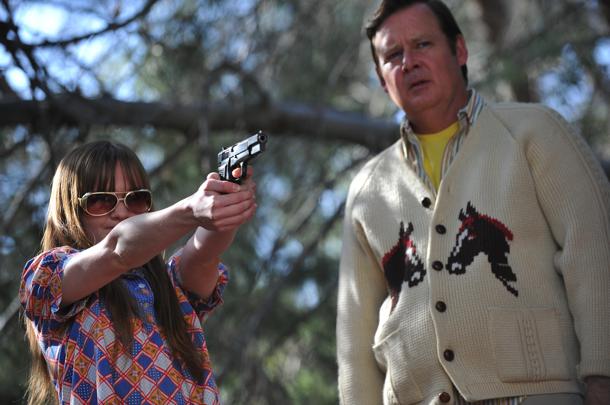 “My name is Frank. But that’s not important. The important question is “who are you?”  America has become a cruel and vicious place. We reward the shallowest, the dumbest, the meanest and the loudest. We no longer have any common sense or decency. No sense of shame. There is no right and wrong.  The worst qualities in people are looked up to and celebrated. Lying and spreading fear are fine. As long as you make money doin’ it.  We’ve become a nation of slogan-saying, bile-spewing hate-mongers. We’ve lost our kindness. We’ve lost our soul.”

If your idea of hell is X-Factor, inconsiderate, noisy neighbours and the down-spiralling of civilisation as we know it then this film is for you. If you sometimes want to ‘take out’ the entire queue of texting teenagers in Starbucks, or have a pot shot at a pointless, self-seeking celebrity then you’ll cheer out loud for Bobcat Goldthwait’s character Frank (Joel Murray) in his latest black comedy.  If not, pass on this one or you are going to get riled or at best wonder what all the fuss is about.

With a wincingly tart screenplay and well-observed storyline God Bless America was real tonic, and arguably the least politically correct film of 2012, but as political correctness is now reaching its zenith a decade later, things have clearly moved on to an era where practically everything is out of bounds. Frank is a mild-mannered decent guy who has reached the end of his marriage and his tether with the neighbours next door. After several dispiriting incidents at home and at work, and a possible terminal illness to deal with, he decides to come out fighting and goes on the rampage with a Colt 45 and a young and spunky accomplice called Roxy (Tara Lynne Barr). This farcical ‘Bonny and Clyde’ duo vow to take down any tedious suspects crossing their path and although they lose steam in the final stages we can’t help having fun on their joyride. MT