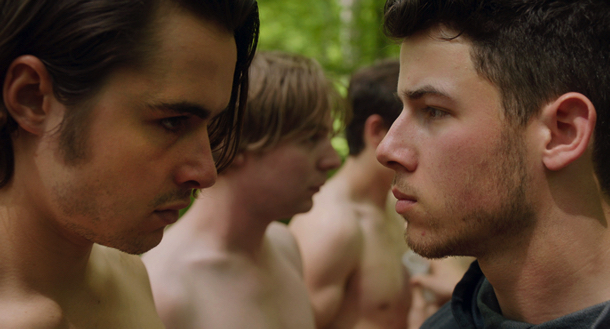 US director Andrew Neel’s men only testosterone-fuelled fraternity tale is, as you’d expect, long on bolshy male-bonding and short on characterisation. Rather more in the mould of The Riot Club than 22 Jump Street, it follows teenager Brad (Ben Schetzer) on the first year at Cincinnati’s Brookman College after a vicious mugging has left him under par and psychologically scarred during the summer vacation. Although his elder brother Brett (Nick Jonas) is there to watch over him this proves to be offer consolation once he arrives in the macho environment where he undergoes a violent initiation routine of hazing.

This film offers a trenchant and unflinching look at all-male environments where uncotrolled aggression and bullying go unchecked while posing as brotherhood and eventually reach outlandish proportions and tragic consequences. Although Neel makes us feel the blunt force of this relentless brutality he gives us little in the way of backstory or textural context to make us care about any of the individuals cooped up in a macho web of tribal warfare, based on Brad Land’s 2004 memoirs and scripted by David Gordon Green.

Ben Schnetzer gives a resonating performance as the young man determined not to let his masculinity crumble in the force of circumstances; his whole college persona and social life and seems to hang on a successful outcome in the initiation war. For many GOAT may prove almost unwatchable at times but Neel keeps the tension taut and the undertone lyrical with a few Latin phrases and occasional moments of introspection amid the stark realism and Ethan Palmer’s handheld camerawork in an around the Ohio countryside. Arjan Miranda’s atmospheric score punctuates the action in an arresting indie drama. MT