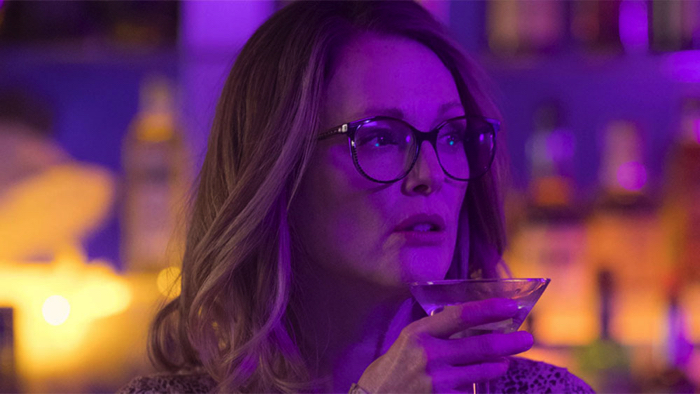 Sebastian Lelio takes his Chilean production of Gloria to Los Angeles, and even though Julianne Moore is magnificent in the title role (as was Paulina Garcia, who won Best Actress at Berlin), this version is not a winner, largely down to the tempo – the original Gloria was a tightly-paced fast-moving romantic drama, evocative of the intense cosmopolitan atmosphere of the capital Santiago. This LA version suffers a meandering script and too much sentimentality. Lelio may have won the Oscar for best Foreign feature with A Fantastic Woman, but his strongest film to date is still his Berlinale hit Gloria.

We meet Moore in a dance club looking for someone special, although her independent life is full of friends and family. Her choice of Arnold (Turturro) is an odd one: he is an ex-Marine, weapons aficionado (running a military theme park, where participants shoot each other with paint guns) and global-warming denier to boot. The sex is good, but their different outlooks clash at a family re-union. Gloria invites Arnold to a party with her ex-husband Dustin (Garrett), his new wife Fiona (Triplehorn), and their adult children Peter (Cera) and Veronica (Urbach). Whilst Gloria gets on very well with her ex and Fiona, Arnold is left out in the cold.

The four of them enjoy a nostalgic journey into the childhood of Pete and Veronica, ignoring Arnold. He leaves, and it takes a while for the rest to recognise his disappearance. Gloria is unforgiving and drops him. His two grown-up children resist him have a new life. After getting back together the couple head to Vegas where Arnold’s daughters again get the attention, after one of them walks through a glass door. After after a sweet revenge act on Arnold Gloria is back to the drawing board, unbroken in her optimism to find a viable man to love.

Lelio plays to the gallery, desperate for Gloria (and the feature) to be loved at all costs. The cheesy moments don’t help: when Arnold reads a South-American love poem to Gloria, the cringe level rises. There are some nice touches, like the Sphinx cat who has adopted Gloria; and her phone calls to the children, ending, passive-aggressively with “it’s your mother”. Arnold puts up with his two clinging daughters, but Gloria can’t let go off her daughter Veronica, who is off to Sweden to marry a surfer. All said and done, this is a pale rider, Lelio does not make the most of the situation and neither does DoP Natasha Braier, whose Las Vegas images are particularly cliché ridden. Moore saves the day, but – as is almost always the case – you can’t beat the original. AS