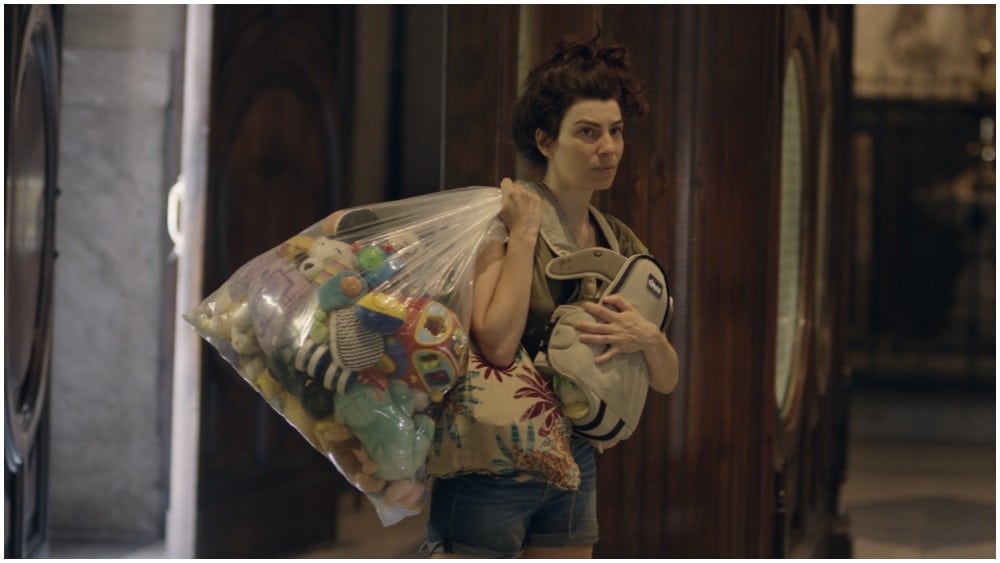 This slow-burning and sensitive drama explores the overwhelming sense of loss and confusion brought on by a pandemic, a state of affairs that will be familiar to all of us. Ciro de Caro’s loose direction oscillates between impressive scenes and fuzzy vagueness held together by Rosa Palasciano’s luminous presence as Giulia, her lack of certainty leading to an identity crisis as relationships come under pressure.

In Rome, we meet first Giulia with her boyfriend Alessandro (Quinzi), he wants to split up but she insists on having ‘another baby’. She embarrasses him in front of his family then rushes off, looking in waste bins for discarded children’s toys, a habit she indulges in for the rest of the feature. Giulia’s employment track record is not looking good: working part-time looking after an old lady she ends up stealing from her. At the same time, another job in a care home comes to an end, Giulia holding Sergio (Di Benedetto) responsible. Sergio and his two friends Ciavoni (Ciavoni) and Fausto (Di Sante) are nevertheless obsessed with Giulia, the four of them driving to the seaside where they meet up with Giulia’s friend Sandra. After a stressful afternoon ends with arguments and accusations, Giulia wanders off on her own through the countryside, where she releases a horse from its tether, a metaphor for her own desire for freedom. There are elements of Neo-Realism at play, but De Caro’s narrative mostly lacks focus drifting off into banalities, feeling more like a ‘first draft’ than a polished final feature, although some may interpret his enigmatic approach as representative of Giulia’s loss of self. DoP Manuele Mandolesi limpid visuals capture the essence of the fragmenting Giulia in this languorous portrait of a woman in distress. AS