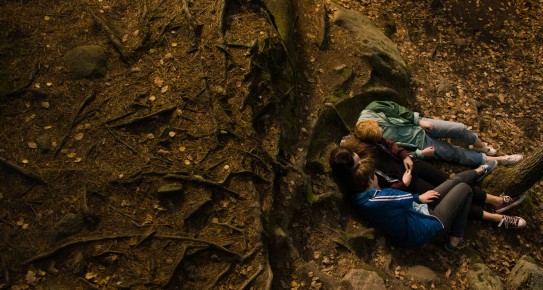 Adapted from Jessica Schliefauer’s prize-winning novel, Alexandra-Therese Keining (Kiss Me) retro drama harks back to the 80s where three teenage girls find away to escape bullying thanks to a magic drink. What starts as a body-transfer fantasy soon explores weightier themes about the true nature of sexual orientation and teenage angst in a macho school environment.

The three girls are 14 year old students Kim (Jagell), Momo (Nyvall) and Bella (Holmen) who are close allies in their campaign against sexual bullying by the boys, and a total lack of protection from the indifferent teachers. One evening, Bella finds a mysterious seed, that produces a an exotic flower in just one night. After a fancy dress party (with masks straight out of Eyes Wide Shut), the trio samples the flower’s sap, and during a cut in a trance-like sequence, suddenly are transformed into their male equivalents (played by male actors):

Whilst Bella and Momo revel in this confidence-boosting return to girlhood during the daytime, Kim is much more happy to be a boy. On the following night, the (male) trio is invited to a football game and a party, where Kim meets Tony (Berg), a toughie from a nearby the estate. The two go on a burglary spree, and Kim somehow falls for Tony, whose harsh exterior hides a uncertainty about his sexual orientation. During the day time, the girls, now better equipped to fight off the aggressive boys at school, discuss their future: Kim alone dreads the day the sap will dry up. To make matters even more complicated, Momo discovers her feelings for the male Kim. After the greenhouse with the sap burns down, the female Kim, her male Ego rejected by Tony (“you are a faggot”), steals his car and gun and drives off into the night.

It is clear, that Kim is much more at home in a male body than a female one. At the same time, he is drawn to boys, and rejects the female Momo, who has fallen in love with his male identity. What looked like at first as semi-lesbian trio, turns out into something completely different: The female Momo is clearly attracted to boys (but not the one of the macho-variety she encounters at school), Bella is extremely shy and reticent, and has yet to discover her sexual identity, whilst the male Kim is prone to male violence, his female Alter-Ego hated so much. For the female Kim, there hangs indeed a big question mark about her future.

DOP Ragna Jorming’s images are rich and evocative, often cutting off into science footage, with multiplying cells. The slow-motion underwater images are a rather overdome, but overall the visual impact is stunning. Whilst Keining’s direction is faultless, her script, particularly the dialogues, is often trite and over-didactic; some things are better left the the imagination in a subtle subtext. But overall, Girls Lost is a daring and original achievement. AS

GIRLS LOST will be released in the U.S. and Canada via Wolfe Video on December 13: on DVD & VOD and across all digital platforms including iTunes, Vimeo On Demand, and WolfeOnDemand.com and many major retailers.