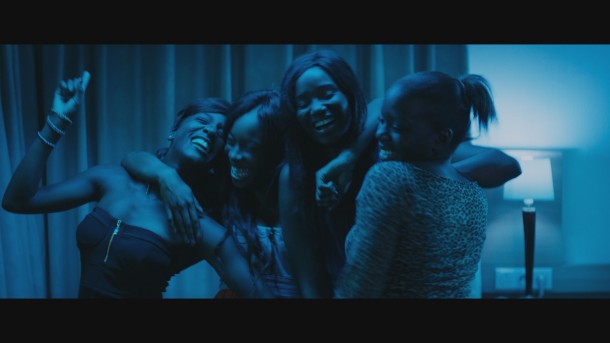 After Water Lilies and Tomboy, GIRLHOOD is Céline Sciamma’s third portrait of female adolescence. The heroine Marieme (Toure) lives on an estate in Saint-Dénis, a Parisian suburb – it being France this is not just an ‘estate’, but an HLM (Habitation è Loyer Modéré), or rent-controlled housing; but the high-rise blocks are just a dump for everyone who cannot pay the exorbitant Paris rentals. Her brother (Mendy) is a brute who pushes her around, and her mother, who works as a hotel cleaning lady, has dumped her youngest daughter on Marieme. No wonder that Marieme’s grades are not up to standard and she has to choose a vocational course – which she hates. Closed in on all sides, Marieme meets three older girls, who hang out and look rather menacing. Lady (Sylla) is the leader of the pack, Fily and Adiatou are her obedient sidekicks. The mini-gang has recently lost the forth member to motherhood, and Marieme joins, at first, rather reluctantly. But after a night in a hotel, gorging themselves on pizza and trying on all the beautiful clothes they have nicked in Paris, the quartet is reborn.

The strict hierarchy of the girls is threatened when Lady looses a fight with another girl, and Marieme takes the victor on and defeats her, cutting off her bra like a trophy. But Marieme’s life is still in limbo: her boyfriend Ismael (Diabate) wants to marry her – but early motherhood is not on Marieme’s agenda; the leader of a gang makes her sell drugs before she stops before getting caught – but any real professional outlook is dim. Sciamma leaves GIRLHOOD open-ended: Marieme wondering, like the audience, what to do with a life, which has dealt her such a hopeless starting position.

Violence dominates GIRLHOOD, mostly male-instigated, but Lady (whose real name is Sophia) and even Marieme herself, resort to it when pushed. And yes, they do enjoy it – at least a little. In the opening scene an all-female American Football match sets the tone for what is to follow: these girls and young women are no shrinking violets. Architecture too is brutalist: The high-rise blocks look like awesome spaceships, where aliens might lurk behind the often blacked-out windows. “You can kill people with housing as well as with an axe”, said the Berlin journalist Zille in the 1920s – and this was as true as it is today. The camera is vey innovative in finding new angles to follow the fast moving action, always contrasting with intimate close-ups. But most brilliant are the actors, particularly Karidja Toure, who carries the film, which sags a little bit here and there, not justifying a near two hours running time. AS