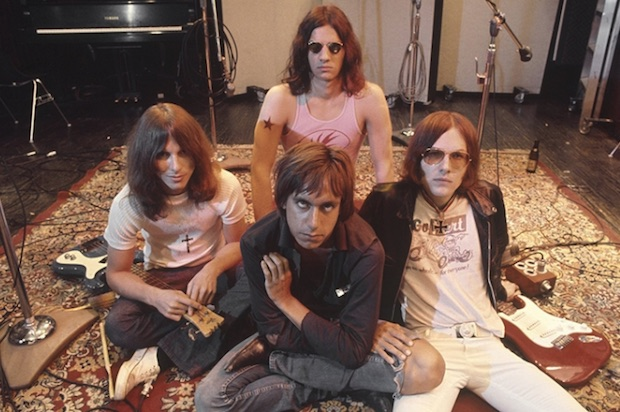 You might expect Jarmusch’s portrait of wild child Iggy Pop to be idiosyncratic; but it is also witty, inventive and affectionate in showing how Pop’s rock band The Stooges went on to influence popular music in the four decades that have followed his often shambolic rise to fame with a brand of music that burst onto the scene in mid-sixties Michigan. On stage Iggy Pop bops and writhes around, occasionally lurching forward into the crowd like a king cobra on cocaine, but in private he is an articulate and engaging raconteur who flashes a row of even white teeth with every outrageous revelation as he wriggles around on a Louis XV gold chair in his yellow caravan. Clearly Pop’s a maverick in the music star firmament: “I don’t wanna be part of the punk crowd, the glam crowd or the TV crowd, I just wanna be”.

A long term friend of Pop, Jarmusch enlivens GIMME DANGER (lyrics from the 1973 album, Raw Power) with collages and witty animations (by James Kerr) depicting vignettes from the band’s history and these are restlessly interwoven into the narrative that zips along with photos and archive footage of Iggy and the band that go to make up this entertaining and meaty biopic, dedicated to band members who are no longer alive. Born in Muskegon, Michigan 1947, James Newell Osterberg Jr was an indulged child allowed to play his drum kit in the main room of the trailer where he grew up and eventually took over the main bedroom in Ann Arbor, Michigan. Jarmusch focuses his film on the rise and early demise of the band from the late 1960s until the mid 1970s and the Bowie association (under British manager Tony DeFries) and then follows through with the Stooges’ ‘reunification’ in 2003 until their recognition in the Rock and Roll Hall of Fame in 2010.

His own musical influences number R&B blues singer Bo Diddley and he irreverently disses the 1960s flower power era as being a corporate set-up. Talking heads joining the commentary are his original guitarist James Williamson who returned to the band after a 30-year career in Silicon Valley and whose intricate playing style Pop describes as “like somebody’s just let a police drug dog into your house – he goes everywhere”. There is also Stooges’ manager Danny Fields who signed the band to Elektra Records; Ron and Scott Asheton, Mike Watt and Steve Mackay.

Drugs were an inevitable part of the band’s decline but this is acknowledged in a cursory fashion and Pop is clearly much more interested in talking about musical styles and jazz and blues influences that informed his creativity. His shirtlessness is down to Yul Brynner in The Ten Commandments and there is a hilarious and well-chosen clip showing the actor flirting with Anne Baxter from 1956.

Live performances are evidence of Pop’s sheer joie de vivre that often leaves his band members playing alone as he throws himself at the mercy of the crowd during hits “I Wanna Be Your Dog”, I Got a Right and “T.V. Eye” and there are also moments with the Sex Pistols, The Ramones and the Buzzcocks who were influenced by the wildfire force of nature that is Iggy Pop. MT