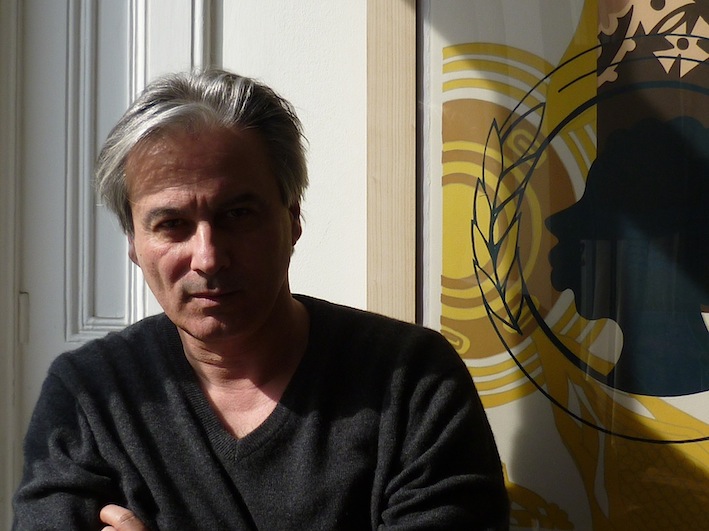 Andrew Rajan met Gilles Bourdos in London recently to talk about his latest film RENOIR, which is now out on DVD.

AT Obviously, the first question has to be – what inspired you to make this film? You were in a museum?

GB Every time I finish a movie, I love to go to a museum, to walk, to clear my head, without any agenda, just to find peace. They make me feel peaceful. So, I was in NY and I was walking in the Met and was in the French area- Renoir and Cezanne; it was striking for me because right then, I really felt I belonged to this cultural history.
So, maybe I have been making movies now 15-20 years, but this was the first time I had a feeling that I wanted to be a French director of this movie. It was very strange sensation and I started to read around Cezanne, Renoir and I found this specific story of when Andree Heuschling first arrived at Renoir’s house and I found it very fascinating, as we don’t know very much about this moment.
So she was the Perfect link to tell the story, not something intellectual, but something real, with flesh and blood, you know, the relationship between a father and a son, the relationship between cinema and a painting.
So, it was a ‘narrow’ situation, you know, with just a house, with a garden paradise around it and a big wall around that, so I found it to be a perfect set up situation for this film.

AT That being the case, the story is of course about two extraordinarily famous people. Were you at all worried about making a film about two ‘Sacred Cows’?

GB Sacred Cows! [laughs] Yes, yes, you know, that is the reason also I wanted the specific sequence when Andree is breaking the plates and she is saying ‘I am really fed up with the Renoirs’, you know, sometimes I felt the same way too, I needed those plates.. making this movie, it provided me with alot of pleasure to make this sequence too, you know?! [laughs]. So you know, in the beginning when you think about it, at the beginning of starting work, it could be an impressive (intimidating) thing, but after a while you (understand you) are simply working on a story about a father and a son and a girl and a young boy, so for example with (actor) Vincent Rottiers, I would say ‘don’t think so much about Jean Renoir, because then, you act with all of it on your shoulders’. You are back from the War, just try to keep it simple. It could be anyone; you work on a character, but it could just be a worker in a factory. They are birth(right) and race free in cinema.

AT I am interested to know about you; where you were born and your influences… 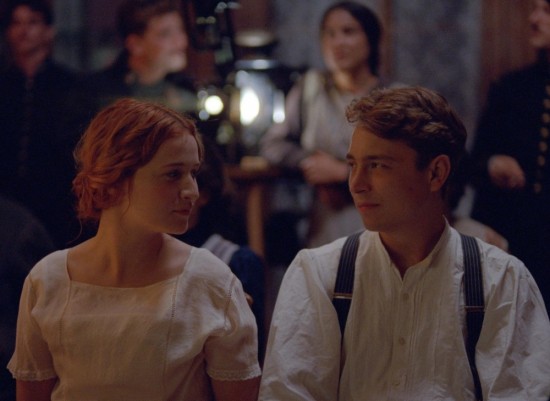 GB Yes, so it makes alot of sense..  I came from a working class background… and when I grew up with paintings everywhere, when I was a kid.. because it is a city -an area- where the (notion) of painting is very important; there was Renoir, Picasso… Cezanne.. Bonnard so many painters from there and around… so you have almost a museum of painting on every corner.

AT So, even as a working class boy…

GB Yes, it’s cool, there were pictures, posters and postcards everywhere, it wasn’t just separate, you know. The idea of the painting, it was everywhere, so it was just normal to have a picture of a Matisse somewhere. So I think it was huge influence on me.

AT Then, going through school, you didn’t decide you were going to become a painter…

GB I don’t know why (I chose what I did).. I didn’t go to (film school) I was looking at photography to begin with, more so than painting. But then I do love cinema too, so it started like that… and then I started to write and I always felt that I could learn what I needed to learn from watching cinema too, learn..

GB Enough, exactly –enough to Start something. And make Alot of mistakes. And afterwards, you are learning because you are making mistakes. I just had to make my first 16mm movies.. and make alot of mistakes and… you learn, step by step, you know.

AT Your first films, you just made with friends, or…?

GB Yep. I was in Paris- I moved from Nice to Paris, because unfortunately, if you live in France, you cannot see films anywhere really, unless you live in Paris.

AT So you realised when you were in Nice you needed to move to Paris if you were going to be a filmmaker. And how old were you..?

GB …I go Paris and I was with a friend who is a filmmaker too now, a good one and a screenwriter too and we were writing together… actually, we didn’t go to Paris to become filmmakers, to be exact, we didn’t know then.. we went because -it was before the DVD (existed)- we were not able to see enough movies. We wanted to see all the Tarkovski movies, all the Ingmar Bergman movies… and on the Big screen. And the only place to do that was in Paris! We spent maybe two or three years, just going to see films. Paris is the best city to see films. There are so many cinemas there. Every year you have a festival showing All the Bergman films, so that was the most important time in my life for me as a director, you know, but maybe even then, I didn’t know I wanted to be a film director…

GB Even then, I didn’t know! I was just driven by this desire to see cinema.

AT Who would you say is an influence- you mentioned Bergman, Tarkovski..

GB Different moments of my life I would say different directors, but… Italian directors, really.

GB Bertolucci. The way that Bertolucci worked with colours, for example. That is something I found myself drawn to, because you see, born in Nice, growing up there we are just so close to the Italian border, you know? I am French but…

AT Very close to the Italian sensibility..

GB Yes, yes, we are very close there to the Italian sensibility. We share the same coast, the water… And I did love Visconti, Fellini, Bertolucci… all those.

AT More than the French..? 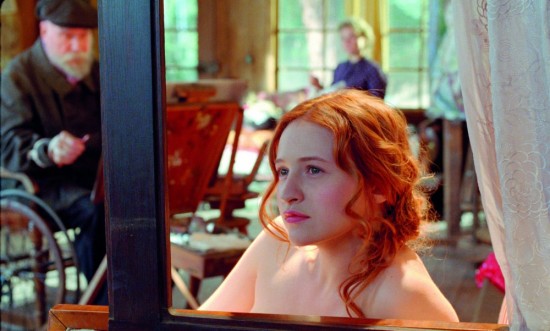 AT Interesting. So you made a few short films. How did your first feature film get off the ground.. Disparus? (Disappeared).

GB Disparus, yes, (sighs) it was a big fight, because it was set in the Thirties, a kind of political love story.. it was a very ambitious film. Period films are very difficult to do anyway, as you always need more money; it was a kind of thriller. It was based on a true story too. There, the Surrealists and the Trotskyists were very close to each other in Paris before the war (1938), so there was political intrigue and infiltration. It was a big movie, which I also produced.

AT ..The story came from a news article?

AT Going back to Renoir- you live in New York too, I believe?

AT When you go to a museum, is it the art that attracts you, or the space?

GB I going for the walk inside… actually, you know what? I think I am going to a museum, as others go to a church. So… it’s the whole thing…

GB A combination of the place, the art… because what I have found in a museum is that it is a holy place for the ‘genius of humanity’, you know? So I need to talk with the dead. It is a way to talk to the dead artist, you know, it’s a way to say ok, I am the one -following the chain…

GB The thread. You know that is something very important for me now. Because I am not trying to break everything (that has gone before, in order) to do something new.. Not that. When you are young, it seems like you can do that, you can break every rule and do something Totally new. Now, I love the idea that I belong to a long chain of history..

GB A continuity, of course. 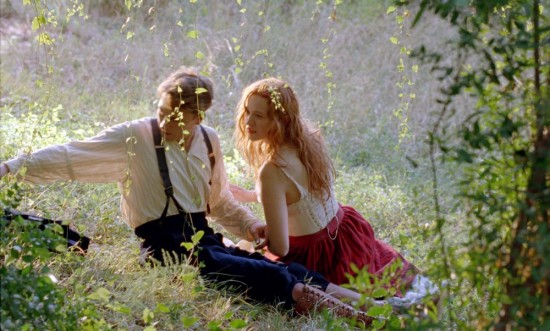 AT So, what’s next for you now?

GB Yes, I am working on a different possibility in France. It will be a European movie, an 18th Century movie..

AT Ok, a Period piece in France… because I know before, you worked with the Americans and did an American film (Afterwards 2008).. how was that?

GB I like the American landscape. I like the people. The idea of America, it is nice because it is a melting pot; New York, Paris, London, Berlin, they have this and I like it. But I find New York to be more similar to London than it is to Atlanta. Living in a big city, there is a similarity.. Also different (life) experiences.
The Americans are very efficient at working.. and that is good, but there is no flexibility! That is my main problem with them. Because I am working with a Taiwanese DoP (Ping Bin Lee) and this is very different. But he works only with me in the West.. he works in Japan, in China, in Korea. But we work in a very similar way. We try to stay flexible. We work with a small crew; I am extremely precise the details, hair, costume, makeup, everything coming into my frame needs to be checked precisely, but I don’t use storyboards.
Whether I use track and what kind of shot, I decide at the last minute.

AT You like to see what the actors are going to do first..

GB Because you don’t know how an actress is going to move from here to there, so how can you decide months before how you are going to shoot it?! And maybe it is going to be sunny, or cloudy, raining, so how do you know where you are going to position things until you get there? I love to stay flexible.
As a filmmaker I am working with living elements; Weather, human beings. We are not puppets. So I don’t want to be too strict or lock it all down with papers and storyboards. That’s the problems with the Americans!

AT So, over there, the producers are wanting everything just so..
GB Not just the producers, everyone! Even the actors! Everyone in America hates improvisation.. they hate it!

AT The actors? I thought maybe with John Malkovich…

GB Ah, Malkovich, no, he was very good. He is great, he is great..  he understood, but then, he has worked in France alot and lived in France for a while. They don’t like it. They like rules, you know, they need everything to be nailed down. But then, they are very effective, you know, they are very good at what they do. They really need to organise it. They really believe in the system. This is why they made the computer, because they are very good at needing everything organised… with them there is only black and white.

AT There’s no greys…

AT Well…. I think we are done.

AT Thank you very much indeed. I didn’t wish to pry too much, but I was interested and you were a total mystery, there is nothing of you online so…

GB No, but it is ok, I am a very private person, you know. But I understand. It is all about the movies, so that is ok.

RENOIR IS NOW OUT ON DVD