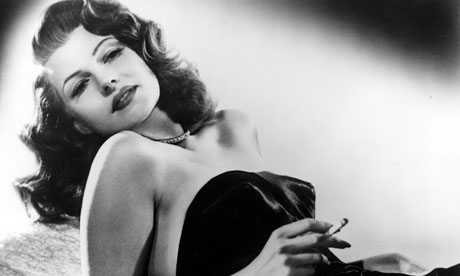 Two of Hollywood’s most iconic films, both directed by Hungarians, share a rather haphazard way of shooting: Michael Curtiz’ scriptwriters for Casablanca, Philip and Julius Epstein and Howard Koch, waited every day for a new development during WWII, trying to get the newest changes on the front into their script; while producer/ scriptwriter Virginia von Upp delivered the script for Vidor’s GILDA (based on a short story by E.A. Ellington) at the rate of one or two pages at a time – usually on the day of shooting.

Gambler Johnny Farrell (Ford) is saved by casino owner Ballin Mundson (Macready) after the losers in his last card game try to rob him of his winnings. Mundson employs Farrell as his assistant while he is away working as frontman for a Nazi organisation in South America. Mundson, a misogynist like Farrell himself, returns with a bride in the shape of Gilda (Hayworth). Farrell seems to be employed to look after Gilda, making sure his boss’s prize possession doesn’t meet other men – while falling for her himself. After Mundson fakes his own death, Farrell and Gilda marry but he wants his new wife, to remain faithful to her first husband. When Mundson, very much alive, learns about the marriage, he wants revenge – but a lavatory attendant kills him with his own stiletto.

Before shooting started on September 7th 1945, the marriage of Rita Hayworth and Orson Welles was very much on the rocks, and an announcement was made that the couple was divorcing – even though there was a late reconciliation (for the time being). Columbia boss Harry Cohen was very keen in following the Hayes Codes to the point that the film did not make any sense (Gilda turned out to be a lady and not the tramp). He fostered a romance between Hayworth and Glenn Ford for the newspapers. Ford and Hayworth led him a merry dance, staying on the studio long after shooting: the money conscious Cohen asked them to leave: “I can’t keep the studio open all night. It costs money. Now, get the hell out of here and don’t forget to shut off the lights when you leave.” The pair had another drink on Harry.

GILDA is full of sexual innuendos: when Gilda and Johnny are dancing she says: “I have to keep dancing, Johnny, as long as I have my arms about you, or else I might forget to dance. Push my hat back, Johnny’”. The people in the Hayes Censorship office had obviously never heard that the star’s hair is used as a sexual metaphor. Neither did they object to Hayworth (or better Anita Ellis) singing “Puut the blame on Mame”, stripping off her long gloves, and asking the audience to help her with her striptease: “I’m not so good with zippers”. GILDA changed Hayworth’s image for good: she was no longer the good girl from the musicals but one of the new breed, the deadly femme fatale of the film noir, in the footsteps of Mary Astor (The Maltese Falcon), Clare Trevor (Farewell my Lovely), Barbara Stanwyck (Double Indemnity) and Lana Turner (The Postman Always Rings Twice).

Glenn Ford was not very fond of the director: “Mr. Vidor was a very strict, demanding director who had a streak of sadistic, Hungarian love-hate understanding, and he sort of nurtured that aspect. His instructions, before we did a scene or were thinking of doing it, were pretty incredible – even in today’s market. I can’t repeat the things he used to tell us to think about. They are marvellous images to hold.”

Apart from Hayworth, Polish born DoP Rudolph Mate (To Be or Not to Be), was the other stars of Gilda. The black and white images literally glitter when the camera trails on Hayworth: the light plays with her, treating her like a dark, dangerous creature illuminated by star light. Her floating presence alone is the total subversion of the Hayes Code. AS

OUT ON 30TH JUNE 2016 COURTESY OF THE CRITERION COLLECTION UK