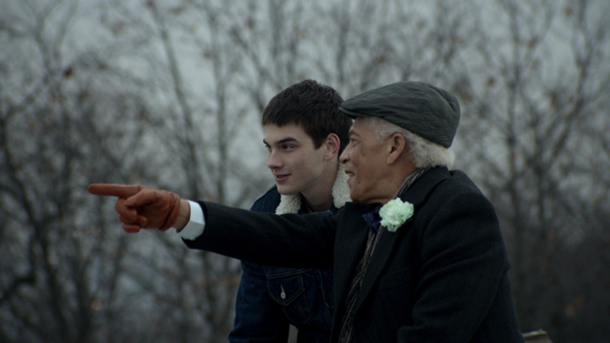 A young lifeguard gets a hard-on while giving mouth-to-mouth to an elderly male swimmer, forcing him to re-assess his romantic intentions to his girlfriend, in Canadian arthouse director Bruce LaBruce’s tame trans-generational romance that dabbles in attitudes towards ageism.

Lake and his girlfriend Desirée (Kate Boland) seem a well-matched, happy couple, but Lake decides to explore his emerging fetish for older men by taking a job in the local care home, where he meets Melvin Peabody, an elegant and sophisticated man in his eighties.  Shocked at the ageist attitudes towards its inmates, Lake’s growing affection for Melvin makes him determined to help him pursue his dream of visiting the Pacific Ocean.

Once on the road, Melvin emerges a flirty, vivacious character, while Lake morphs into his implausibly jealous boyfriend. Gerontophilia is tonally uncertain from start to finish, swinging from candid openness (in scenes with Desirée) to lukewarm humour and performances that feel equally ‘warmed through’.  It toys with the subject of ageism but comes down firmly as a tale of misogyny with both the female leads appearing weak and directionless, and totally reliant on men for their kicks  (“Woman is the Nigger of the World”).

As Lake, LaJoie is a bland boy threatened by his strangely mannish mother (Marie-Helene Thibault) who is rapidly heading off the rails. He plays hunky himbo to Katie Boland’s sparky Desirée, but when Ralph Borden’s Mr Peobody comes on the scene, he disappears completely behind the coquettish ‘queen of the road’ in a pairing which totally lacks sexual chemistry or intellectual spice.  Clearly, Melvin Peobody is the father figure he never had because, if there is sex, it doesn’t happen here. LaBruce is so uncertain about these ‘non-happening’ pairings that he uses footage of stirring skylines and simmering sunsets attractively shot and accompanied by Ramachandra Borcar’s tuneful original sounds, in an effort to inject romance to the flagging storyline.  It’s clear that Lake has some serious emotional issues, but GERONTOPHILIA is neither a meaningful gay romance or a particularly funny straight comedy. MT