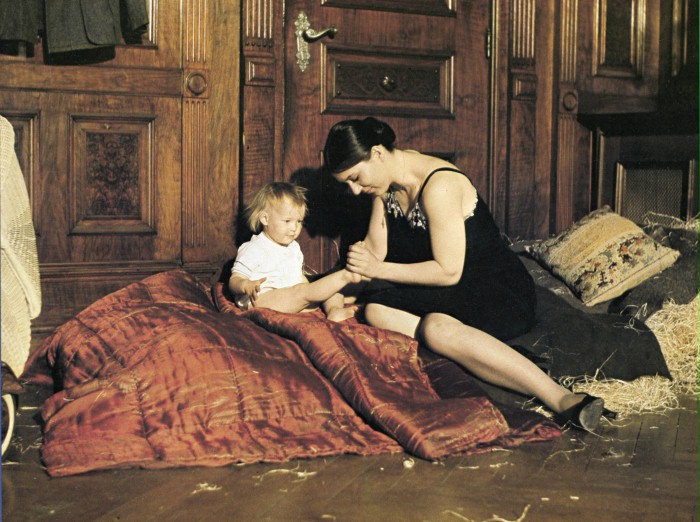 Hema Sanders-Brahms, who died aged 73 in May of this year, was not a favourite of film reviewers in Germany. Her often very personal films were attacked for their subjectivity and her aesthetic achievements were often overlooked. But she was much higher regarded abroad, and GERMANY PALE MOTHER was seen as a definitive work on the role of German women during the 40s and 5os.

The film begins in summer 1939, when Lene (Matthes) and Hans (Jacobi) meet near a lake: a German Shephard dog, encouraged by four Nazis, is attacking Lene. Hans, in a boat with his friend, comments: “She didn’t cry, a real German woman.” They marry after a whirlwind romance just before war breaks out. Whilst Lene is the victim of bombings and homelessness, Hans becomes a killer: twice, in Poland and France, he executes partisan look-alikes of his wife (in both cases played by Matthes). Murdering them, he also murders his wife twice over. Their child Anna is born during a bombing raid, but the harshness of the war is less debilitating for Lene (and other German women) than peacetime: the men return home, women have to obey like in pre-war times, old Nazis soon gain prominent positions in society, and Hans becomes a tyrant at home. Lene tries to commit suicide, but her daughter literally calls her back into life.

Sanders-Brahms comments herself in voice-overs, making the film as personal as possible with her statement: “I live exactly like my parents, just in another era”. Brecht’s poem, which he wrote in 1932, just before emigration, is the banner of the film: “They may talk about the guilt of others, I talk about my own”. A truly epic film, with memorable performances and impressive images – a testament to the career of an underrated filmmaker. AS