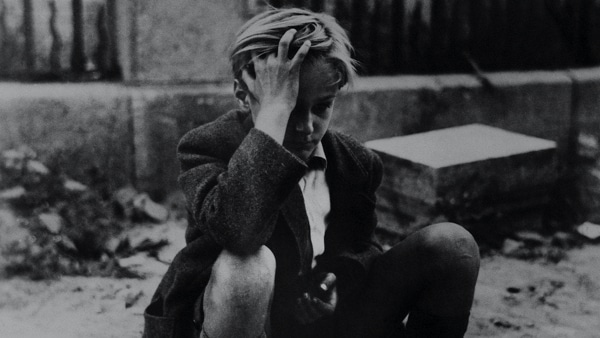 Screening in this year’s LOCARNO FILM FESTIVAL Journey Through History strand comes this neorealist gem that scooped the Grand Prix and Award for Best Original Screenplay in 1948. With Germany Year Zero Roberto Rossellini completed his war trilogy that started with Rome Open City (1945) and Paisà (1946). Filming kicked off in Berlin in August 1947, and when it came to the interior scenes in Rome later in that autumn, the cast of non-professional actors had to be put on a crash diet as they all looked too well to confer the privations of famine and war. Unlike the two first parts of this trilogy, Germany was shot with back projections of the ruined Berlin. Some critics, amongst them Andre Bazin, considered this step backwards even though the film was generally met with acclaim.

Germany mines the dramatic potential of the post war crisis while avoiding melodrama. It’s a harrowing watch, and we feel for Edmund in the same way as we did for Umberto D in De Sica’s story of survival, several years later. It follows the Köhler family in bombed out Berlin with a focus on twelve-year old Edmund (Meschke) whose father (Pittau) is seriously ill. His older brother Karl Heinz (Krüger) is in hiding, fearful of being arrested for war crimes, and his sister Eva (Hinze) has a hard time keeping the family afloat, Karl Heinz living illegally in their household, without even a ration card. Eva scratches by on a shoestring, managing to avoid prostitution as a means to an end, unlike so many women of that time.  Edmund is too young for gainful employment, so child labour is his only option – with limited success.

One day on his way through the bombed city, Edmund meets his old teacher Henning (Gühne) who is still very much a Nazi in his ideology, making use of local kids to work the Black Market with his old Nazi chums.  Henning suggests that Edmund kills his father “because only the strong  deserve to survive”. Edmund does as he is told and poisons his father, but  Henning, afraid that he might be prosecuted, refuses to have any more dealings with the boy and Edmund goes back on the breadline desperate, and now also rejected by his football-playing peers. He watches his father’s body being removed from their house, from a ruined rooftop. But when his sister calls out for him, tragedy ensues.

Rossellini seems to get more and more forgotten in the canon of neorealist directors, but his themes are just as relevant as they ever were, and his style evokes the “pity of war”, as English First World War poet Wilfred Owen put it: “the poetry is in the pity”. French critic Gilles Deleuze echoed this sentiment, just after the Iraq War: ” It seems an apt time to be screening a film such as Roberto Rossellini’s Germany Year Zero as the war in Iraq draws to a close and disputes over the post-war management of the nation take on a disturbing shape. Centring on the experiences of a young German boy wandering the streets of Berlin after Allied liberation, Germany Year Zero escorts us about a city excavated by bombs and missiles – a city constituted almost entirely of rubble. Watching Germany Year Zero while images of Baghdad relentlessly penetrate my living room, I cannot shake off the uneasy feeling that in the ruins of one city I see ghosts of the rubble of the other”.