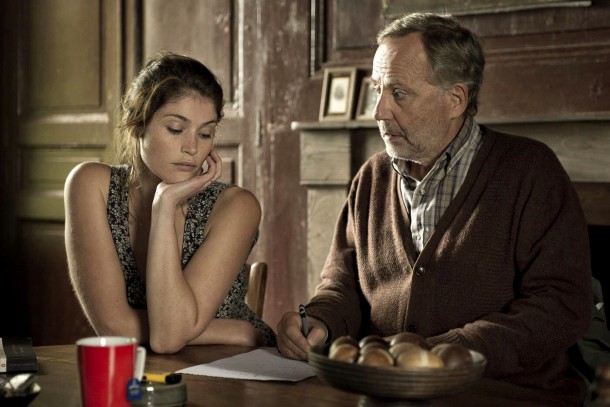 If Posy Simmonds’ chick-lit and the saccharine charms of Gemma Arterton appeal to you then Anne Fontaine’s re-working of the classic Flaubert novel is for you. If not, stay well away from this trivial pick n mix of Chocolat and In the House, drenched in a helping of A Year in Provence…and a dash of Mother’s Milk.

Dumbly scripted by award-winning Pascale Bonitzer to echo Simmonds’ satirical paperback, this Normandy-set romantic romp will have Flaubert spinning in his grave with anger and dismay. A trashy English cast and half decent French one is lead by a charmingly sympa Fabrice Lucchini as, Martin Joubert, a publisher who has retired to the idyllic spot of Auberville-la-Manuel to run the local bakery with his sparky wife (Isabelle Candelier) and teenage son (Kacey Mottet Klein). Taking his romantic disillusionment out on kneading the daily bread, he has comes to terms with the banality of his life in this quiet country backwater when the arrival of English neighbours, a voluptuous young Gemma Bovery (Arterton) and her broke and raddled ‘hubby’ Charles move in next door, sets his feathers all a flutter with a sexual frisson tempered by the fear (or is it hope) that this perky young bride will end up with the same fate as her literary namesake from Flaubert’s 1850s novel.

Best known for Coco Before Chanel, Anne Fontaine opts for a jaunty and salacious tone that will most likely appeal to Daily Mail readers rather than Simmonds’ Guardian following, ramping up the sensational aspects of her Bovery story rather than the insightful realism of the French original, resulting in a schematic tale than feels rather dated with its 80s sensibilities riven with unlikely pairings and  glaring plotholes (to discuss them would reveal too much). Let’s just flag up one for your consideration: Why would nubile and artistic Gemma end up with a divorced, insolvent loser like Charlie (Jason Flemyng) living in a damp and dreary country cottage in the 21st century? Clearly Fontaine wanted to make a commercial film that would appeal to UK|US audiences rather than French ones, and Bonitzer’s script is suitably tuned towards those audiences with its mentions of yoga, Notting Hill, rag-rolling and gluten-free bread).

In the same style as Ozon’s In the House, the story unfurls via Martin’s first person narration – he is the only interesting character – but the piece rapidly falls into what Flaubert calls ‘the pettiness and predictability of daily life” due to a trite and unlikeable set of provincial characters in a village that anyone would be desperate to get back to Paris to avoid. Luchini’s expression throughout is one of baffled wonderment and disbelief: that he can be the only decent actor in the film and that he is witnessing the destruction of his beloved literary work. Despite his better judgement, he falls under Gemma’s spell seduced by her sluttish vapidness and entranced by her louche disregard for decency as she falls for the local lord of the manor, a tousled hair youngster Visconte de Bressigny (a really well-cast Niels Schneider) and so begins her descent down the path of her literary counterpart. On the way we have to contend with the evil smugness of local arrivistes Wizzy and Rankin (ghastly Zylberstein and Torens), her ex, demon-lover Patrick (a second rate Mel Raido) and a strange cameo from Edith Scoob as the redoubtable Madame de Bressigny. All the while, we are treated to glimpses of Arterton in her undies (Myla or Agent Provocateur?), boogying down to her rag-rolling, and sensuously pouting over the freshly baked brioches which will finally lead to her downfall in the unlikely and far-fetched denouement. MT