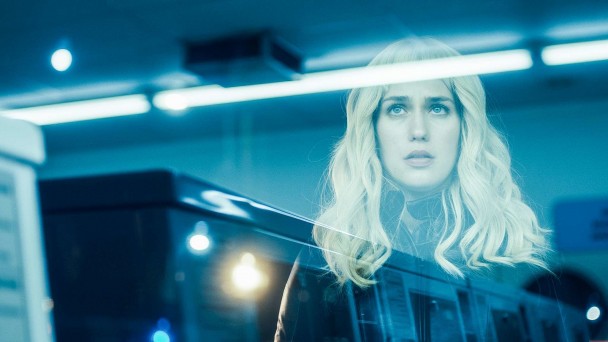 This low-budget neo-Noir is a US indie version of Olivier Assayas’ Personal Shopper and Clouds of Sils Maria exploring the links between female friendship and co-dependence, and the nature of celebrity through the complex relationship of a Hollywood starlet and her PA, who are actually closer that they would like to admit.

Katz is best known for his ‘mumblecore’ period but GEMINI, made on a shoestring budget in down LA, sees a move mystery drama in this female-centric affair which may appeal to arthouse audiences with its enigmatic  storytelling and washed out ’80s B-movie’ visual style, similar to that of Kelly Reichardt.

Jill LeBeau (Lola Kirke) is the personal assistant in question who becomes a suspect and investigator in the ‘murder’ of her stressed out boss Heather (Zoe Kravitz), who has split from her lightweight boyfriend Devin (Reeve Carney) who was covertly two-timing her with model Tracy (Greta Lee). Heather has recently been a petulant figure for all concerned and there’s consequently a string of a characters from her côterie who could have perpetrated the crime.

Jill emerges the more intelligent and convincing of the professional partnership, further highlighting  the dubious nature of celebrity status, but loyal as she is to her boss, she also has her own integrity to safeguard and cannot risk being consumed by Heather’s neediness and narcissistic tendencies.

The film moves at a snail’s pace but the hook is Katz’ dryly witty script that provides some amusing moments. GEMINI is a drama that promises much more than it eventually delivers but will absorb you for its meagre running time with strong performances from Kirke and John Cho’s appealing LA detective. MT