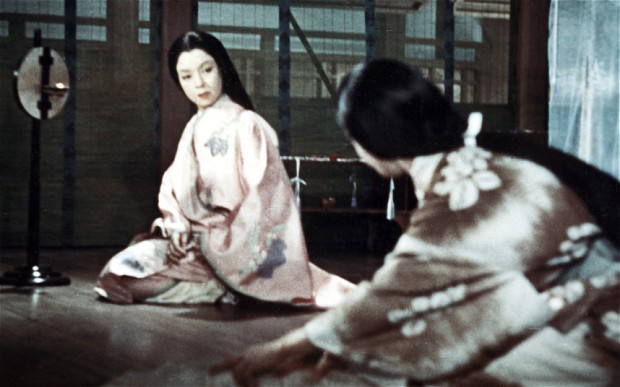 In the early 1950’s Japanese cinema was a revelation. Kurosawa’s Rashomon and Mizoguchi’s The Life of O’Haru thrilled western audiences with their narrative structure and classical composition. They were in black & white. By 1954, Kinugasa’s GATE OF HELL arrived. A colour film of such a breathtaking colour palette that it won the Grand Prix at Cannes and the Oscar for Best Foreign Film and Best Colour Costume Design.

The story is set in the 12th century where a samurai Morito (Kazuo Hasegawa) helps to put down a palace rebellion by using a decoy for the empress, in the form of Lady Kesa ( Machiko Kyo). Afterwards Morito asks for a reward – marriage to Lady Kesa. Yet she is already married to Wataru (Isao Yamagata), a member of the imperial guard. An intense conflict of desire and resistance ensues, resulting in a tragic outcome.

There are great colour experiments that employ their design in a symbolic manner. The River (Renoir), The Red Desert (Antonioni), Cries and Whispers (Bergman) and The Umbrellas of Cherbourg (Demy). Colour ‘spills’ over in those films to make itself a presence suggesting multiple meanings, complemented by its lighting, production and directorial vision. GATE OF HELL is not a masterpiece on the same level. It’s often moving but lacks the emotional depth and engagement of those classics. However the film’s harmonious colour canvas has a dense power that is both painterly yet very cinematic. The first 25 minutes of the film are rightly applauded for their visual power. Scenes of war, panicking citizens and attacks on their homes are constantly filmed through transparent veils and torn curtains. Kinugasa piles on details. Black and red cockerels in a field, the brown bodies of frightened horses, lush green foliage, red costumes of warlords, purple uniforms worn by the higher up samurais and more modest green and brown outfits for the lower order warriors.

Through these swiftly staged actions GATE OF HELL‘S design alternates between watercolour, illuminated scroll and traditional painting. This accumulation of scenes is ‘violated’ by a colour force that moves on and on. As the colour ‘slows down’ the film shifts mood into an amour fou played out in the moonlight. Here the golden costume of Lady Kesa assumes a noble and tragic gleam, as she attempts to resist the advances of Morito, the obsessed samurai.

But the film is by no means a triumph of style over content: GATE OF HELL is a sad and engaging tale. The performances are all good and in the case of Machiko Kyo, absolutely superb. Her body movements (she tends to float rather than walk) combine Kabuki with film-acting. Kinugasa’s direction is always purposeful and confident (and not restrictively static as some critics have unfairly claimed). And the stirring music score is by Yasushi Akutagawa. The only other Japanese colour period film of the fifties that comes to mind is Tales of the Taira Clan. Kinugasa is not on the same filmmaking level as Mizoguchi, but for surface beauty alone runs him pretty close. ALAN PRICE