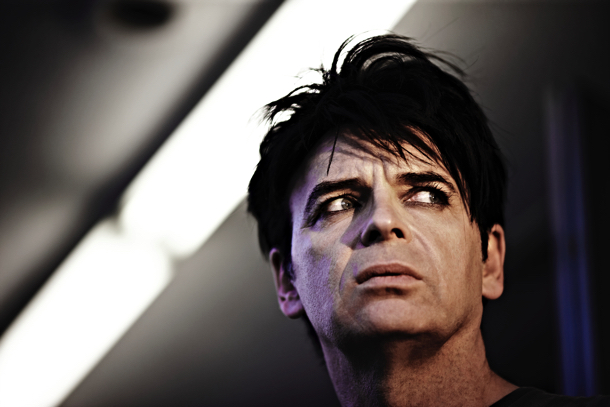 Steve Read and Rob Alexander get together again for their second documentary that stylishly explores the human side of the reclusive British synthpop pioneer who started Tubeway Army rising to fame with two iconic ’70s hits – Cars and Are Friends Electric?

After thirty years away from the spotlight 55 year old Gary Numan emerges a blissfully married father of three small girls and making a move to a castle in Los Angeles to expand his repertoire into the film world and promote Splinter (2013) – his latest album which turns out to be a bestseller. Alexander and Reed’s film doesn’t attempt to fill in the blanks of the past three decades career-wise, but looks behind Numan’s cold and alienating public persona to expose a rather loveable man who is genuinely passionate about his music and disarmingly down to earth. The directors also avoid a talking heads approach centring their biopic on a close circle of Numan’s collaborators and his parents, who reveal how their son was a self-starting loner who suffered pathological stage fright as was much later diagnosed with Asperger’s Syndrome.

Numan started life as Gary Webb and formed his five man band Tubeway Army as a London teengager in the late ’70s, getting them signed to a major label during punk rock’s surge to the public consciousness. When he discovered how the moog synthesiser could produce a series of highly original sounds Numan incorporated these electronic new wave vibes into a groundbreaking album ‘Replicas’ creating the first UK synthpop hit ‘Are Friends Electric?’ – along the same lines as the German band Kraftwerk several years previously. His robotic stage routines and swivelling eye movements where a clever attempt to emotionally detach himself from his public appearances in order to cope with severe shyness and social unease caused by Asperger’s, but they soon became one of the most innovative and successful features of his performances.

However, debt rapidly followed his breakout success largely due to the mounting costs of his futuristic stage sets and expensive lighting equipment and this caused a rift with his father and manager as the family had sacrificed everything for their only son’s career. The film makes no attempt to explore how financially Numan bounced back simply stating that he carried on working and touring, clutching success from the jaws of failure due to inner strength and his relationship with Gemma – a long-time groupie who eventually became his wife in 1997. One of the takeway moments of the film is when Gary shares his composing techniques ensconced in his musical studio. Fully admitting how unpleasant he can become during this anxiety ridden process, he confesses to coming alive nowadays on stage and wishes he could go on forever.

GARY NUMAN; ANDROID IN LA LA LAND works as a portrait of a fully evolved creative force and also as a tribute to  his relationship with the driven force of bubbly Gemma whose hair changes from a raven to flame and then butter blond bombshell during filming and, whom he describes as “everything that I am not” and his conduit to the outside world. Gemma has clearly built her entire existence round the easy-going and appealingly self-deprecating musician who appears to be charmingly devoid of hang-ups or pretensions as he goes about his days in black jeans, tee-shirts and sleeve tattoos. Numan still dyes his quiff of hair black in an attempt to stay youthful. But as his daughter Echo comments: “Daddy you still look old – but with black hair instead of grey”. Clearly children keep you grounded, even when you’re a pop star. MT