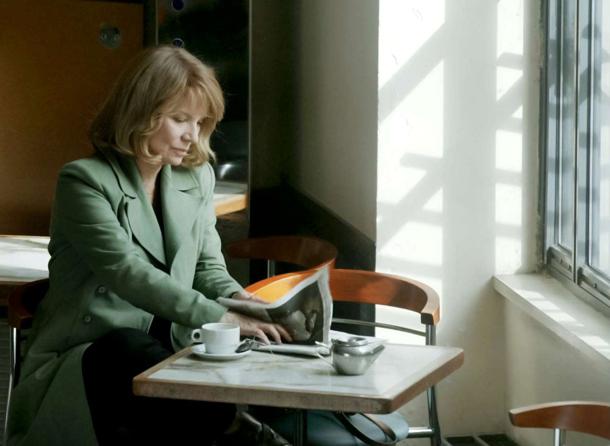 Whether this stylish docudrama will keep you captivated for nearly two hours, it certainly offers a visually appealing look at the daily comings and goings of the one of France’s busiest transport hubs. In the Gare Du Nord, Paris’s ever-shifting social and economic population rub along together sometimes positively and sometimes with outbreaks of violent hostility.  Amongst the handful of characters who regularly inhabit the station is Algerian- born Ismael (Reda Kateb) and graceful history prof Mathilde (Nicola Garcia) who strike up an unusual romance when he interviews her for a survey.  Gradually, through snatched moments of talking and flirting, from platforms to cafes, they be come involved.

Claire Simon is best-known for her documentary work such as Coute que Coute (1995). Her original approach, which aims to capture ‘the essence of reality’ with half-documentary, half fiction pieces, has been seen before in her TV film: That’s Just Like You (2000) set inside the European Parliament and big screen outing God’s Offices (2008) which tackles the world of town planning.

Here in GARE DU NORD, she focuses on four main characters: Ismael, Mathilde, Sacha (Francois Damiens) and  Joan (Monia Chokri).  As Ismael introduces Mathilde to his many acquaintances, he discovers she’s undergoing cancer treatment and suffering considerable emotional and physical strain. But when she becomes involved with a store robbery by a particularly unpleasant thief,  it’s TV comic Sacha who comes to her rescue, acting as a witness and assisting the police with their inquiries. Ismael becomes elusive and it’s at this point that the narrative starts to wander off  on more generalised and less intimate terms, adding texture by introducing incidental characters (often non-professional actors) who commiserate with each other in snatched conversations about their hopes and dreams, as the voyeuristic camera pans over the station offering well-composed widescreen visuals of majestic local landmarks and interiors. Marc Ribot’s atmospheric original score highlights moments of zen-like calm and those of anxiousness.

Alluring and enigmatic at times, confusing and arcane at others, Claire Simon offers up an inventive way of reflecting both the anonymity and the intimacy that can exist in contemporary urban settings, echoing the rich tapestry of cosmopolitan life in an everyday setting. Performances from Damiens, Kateb and Garcia give ballast and integrity to this ephemeral slice of Paris. MT