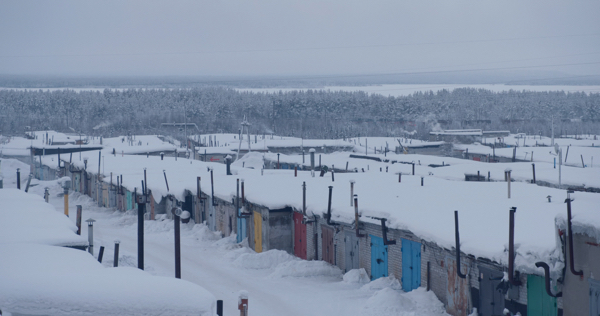 Natalija Yefimkina’s first feature documentary is a bleak look at human survivors in the remote landscape of northern of Russia. Still toiling on long after the end of the Soviet Union, they are treated like the industrial scrap they collect: the mining industry which was once the only employer in the region but has more or less vanished, the work force living in garages at the foot of the mountain, trying to make a living amidst the post-industrial landscape.

These garages, not a single one occupied by a car, are falling to rack and ruin like everything in the vicinity of the old mining shafts. Gas pipes poke out like medieval weapons, vestiges of a warworn past.  Scrap is collected and sold on, an old bus dragged along with a tow truck, later the two men in charge will take the roof from the bus, laughingly calling it a cabriolet.

Survival is the name of the game in this bizarre setting. Victor, an old man of 73, has dug five floors under his garage using only a shovel and a bucket. Victor has been grafting away since the age of 27, his own son just a little boy. Most of his friends have now drunk themselves to death, leaving Victor to tell his lonely story. Nothing left but to move to the ugly city nearby, dominated by the Prefab housing, to live with his wife Tatiana. “Your garage life is over”, she tells him. Victor will die in 2018, followed a year later by Tatiana, who died of liver cirrhosis having worked most of her life in the mines. Vitalik, who had the idea of creating a roofless bus, dies in 2018, just 36 years old. His closest friend was president Putin, the two met via his portrait on the wall and had long discussions about the meaning of life.

Then there is Pavel, a middle-aged icon maker. The priest visits him to commission a special icon. Pavel promises to deliver, and later we watch the priest return to collect the icon intended as a  gift for the CEO of what is left of the mining company, the director, in turn, supporting the church financially. Amazingly, there is a fledging band in all this squalor. John, Lena and Ilja L. make music in one the garages, the first two dream of a life in St. Petersburg. When they have gone, Ilja is depressed, but still goes on writing poetry. Sergej, producing dumb bells from the metal he scavenges, is suffering from progressive Parkinson’s, but goes on working. And then there is Roman, the success story of the community, raising broiler chickens and making a good living from the birds. In a restaurant called ‘Behind the Polar Cycle’, Roman meets Julia, and they fall in love, finding happiness against all odds. But for most of them it’s a grim existence, Viktor’s sums his life up in these poignant words: “I am digging in the dirt like a worm”.

Yefimkina and DoP Axes Schneppat  showcase the dreadful conditions without resorting to talking head overkill. The only of change comes in the shape of snowfall capturing the melancholic atmosphere of overriding gloom in this despondent post apocalyptic backwater.  AS