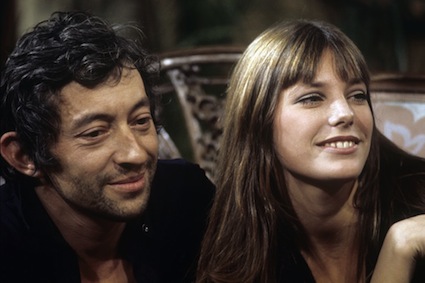 Gainsbourg by Gainsbourg: An Intimate Portrait (2009)

Watching the opening sequence to this paean to a pop/rock god, it’s difficult to imagine what Jane Birkin, Juliette Greco and Brigitte Bardot saw in Serge Gainsbourg.  Circling the stage he presents as a raddled figure puffing on a cigarette as he mumbles the words to Javanaise Melody in his trademark gravelly voice, which accompanies the soundtrack of this latest biopic along with archive footage, anecdotes and musical recordings made during his lifetime until his death in 1991 at the age of 62.

But tracking back to 1968 and to ‘Je T’Aime, Moi Non Plus’, a hit that lasted as long in the charts and in the public memory as the orgasmic effect he evidently had on these sixties sex sirens, there must have been a potent quality to his unique brand of showmanship and romance.  But how do you capture this on film?  He was certainly a charismatic entertainer back then and a treasured public figure for French audiences and one whose charms were felt more keenly in France than on this side of the Channel, ardent fans apart. After Joann Sfar’s feisty 2010 feisty effort which conveyed that SGB had rather ran out of steam by the end of the sixties, did this latest offering get under the skin of a man who was both enigmatic and outrageous in equal measure?.

To a large degree, yes. Although in the smoke-filled haze of Gainsbourg’s career, it offers little in the way of biographical detail or straight narrative but what it does do is to capture the essence of this impenetrable singer who was both repulsive and compulsive and felt, in his own words, a constant struggle between the ‘man and the showman’ with the showman seemingly coming out on top.  And it’s strangely in the unsettled showman side of Gainsbourg that his unique talent seemed to reside. And so, Salfati somehow exposes this introspective man in a fascinating and moving way, offering insight and an entertaining watch for fans and general audiences alike. MT

GAINSBOURG BY GAINSBOURG: AN INTIMATE PORTRAIT IS SCREENING AS PART OF THE UK JEWISH FILM FESTIVAL 2012 CURRENTLY IN ITS FINAL WEEK IN LONDON UK