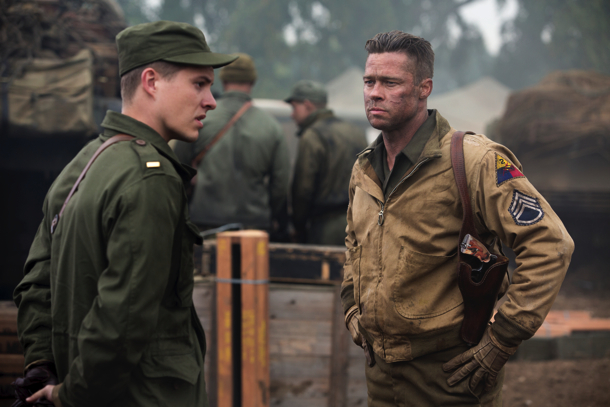 War films tend to lack subtlety – understandable when considering the topic, but writer/director David Ayer (Sabotage) can claim to have reduced the genre to Neanderthal levels with this latest outing FURY. His motley US tank crew, fighting in April 1945 on German soil, consist among others of Brad Pitt’s Don Collier as the leader of the pack, a very oily and rather unconvincing Shia LeBeouf as Boyd Swan and a baby-faced Logan Lerman as the newcomer Ellison (as gunner), who claims “only to have trained as a typist, to achieve 80 words a minute”. Yeah…

It is impossible to catalogue all atrocities committed by cast and crew, but here are two of the worst: when Ellison arrives, after introducing himself with his CV mentioned above, he has to clean the inside of the tank including the remains of his predecessor whose face is literally plastered all over the floor. Later on, our ‘heroes’ conquer a German town and Collier and Ellison enter a flat where a middle-aged woman is hiding a frightened teenage girl, Emma (von Rittberg), under the bed. Collier finds her immediately and before sitting down for a meal, Lerman plays a few notes on the piano. Collier whispers in his ear “if you don’t take her to the bedroom. I will.” Lerman obeys his commander’s order, and has sex with Emma. One would expect the girl to be traumatised by this semi-rape, but Emma declares her love for Lerman, promising to “write to him” (sic). Soon afterwards she is killed, when bombs hit her house.

Collier’s tank is strangely shown more or less in single action, the budget obviously did not stretch to the employment of the usual divisions of armoured vehicles we are used to. This way, war is reduced to a purely individual combat, where ideology or even strategy is left out. Camera work is reduced to showing the obvious (in mostly garish colours), and the acting is as stereotyped as possible. FURY lacks intensity as well as drama, it is an empty vessel for stars ‘showing off’ – unworthy of the real allied soldiers, who fought the last war one could call justifiable. AS

FURY WAS THE CLOSING GALA AT THE RECENT LONDON FILM FESTIVAL