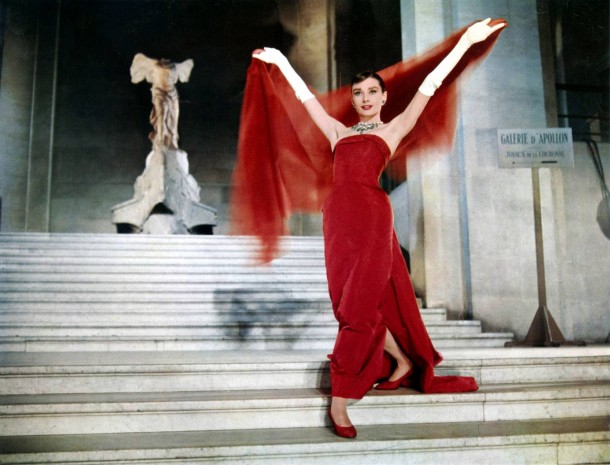 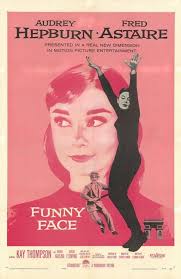 There’s much to enjoy in Stanley Donen’s joyful FUNNY FACE. The music and lyrics are by George and Ira Gershwin. The dancing is exhilarating – Fred Astaire’s fabulous technique makes for poetry – and Audrey Hepburn displays her ballet school training with huge confidence. There’s even downright sassy Kay Thompson zippy contribution to the dancing scenes.

Donen employs rhythmically precise editing techniques: The “Bonjour Paree!” montage turning into a split screen celebration of Paris; and masterly camerawork with Audrey Hepburn’s number “How Long Has this Been Going On” combining singing, acting, lighting, set design and overall balletic energy that’s five minutes of really great cinema.
Yet it’s the colour photography of Funny Face that makes Donen’s film so outstanding. In Joseph Andrew Casper’s book ‘Stanley Donen’ (1983) he concludes that throughout FUNNY FACE, “the film colour danced to tell a story.” For me this dancing narrative skilfully uses colour to psychologise character and satirise its subject matter – the fashion world and Parisian beatnik existentialism.

Take the film’s opening number “Think Pink” with its magazine editor (Kay Thompson) striding towards doors of different colours, seeking the right colour for that month’s issue. This is both a satire and homage to the 50’s women’s fashion magazine. The yellow and lime of Audrey Hepburn’s waved hat in her bookshop scene suggests a deep need for romance, Hepburn and Astaire’s flirtatious duet in the red filtered photographer’s darkroom, the red and green spotlights of the night club episodes and the abrupt freeze of model photography images against Parisian landmarks. All push the story forward, making me think that Jacques Demy’s Les Parapluies de Cherbourg not only absorbed the colour palette of MGM musicals but is Donen’s Paramount achievement.

“Colour is fundamental to fashion photography, and therefore to Funny Face, where, besides being both the chief carrier for movement within and between shots and a cutting principle, it is choreographed as well”: that is Joseph Andrew Casper being spot on again. Of course a film is not just about remarkable photography, the storyline is crucial. Admittedly in romantic musicals we can accept a simpler story. If there is a criticism of FUNNY FACE it’s the failure to fully convince us of the development of Jo Stockton’s (Audrey Hepburn) character. You could say that the script fails to choreograph her transition from book shop assistant/ philosophy student to fashion model icon with adequate scenes. Despite her misgivings (she agrees to it all, so as to travel to Paris and meet the leader of the Emphaticalism movement) her resistance to the fashion crowd is not strong enough. And her need to be swept up into a romance with the much older photographer Dick Avery (Fred Astaire) is a bit underwritten in the film.

Still it is a musical, and you principally come for the singing and dancing. FUNNY FACE gives you that in abundance with great elegance and charm. And if you are only an Audrey Hepburn fan, and could watch her in anything, then for me she’s never been more captivating than she is here. Alan Price