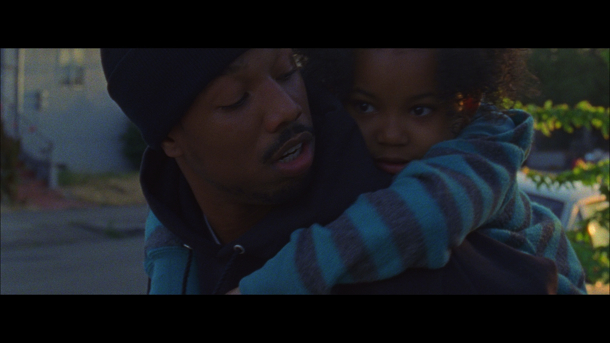 The towering presence of Michael Jordan dominates this rousing, rose-tinted tribute to 22-year-old Oscar Grant who lost his life during an incident on the BART (Bay Area Rapid Transport) during the festivities in San Francisco on New Year 2009.  Ryan Coogler’s debut drama so impressed both audience and jury, it won three top awards at Sundance 2013, echoing the sentiment surrounding the tragedy of an ordinary man who falls victim to unfortunate circumstances and is shot by the Police.

Ryan Coogler puts a relentlessly positive spin on this ‘paean to a victim’ ex-con man-child who is surrounded by strong, female support in his life from his sympathetic mother (Octavia Spencer), his hispanic lover Sophina (on whom he cheats) and healthy young daughter (Ariana Neal). But his explosive temper is never far below the surface as evidenced during his time in prison (we never find out why) and with his ex-employer, who sacked him for bad time-keeping. So he spends his time cruising around with friends and goofing with his daughter while his partner holds down a demanding job.  And while this is a loving portrait of a black family who care for each other, the drama also aggrandises Grant, and in so doing, builds an unrealistic portrait of innocence before it milks the audience for sympathy and opprobrium.

Although Grant consistently comes up ‘smelling of roses’ in life, he did not deserve to die and Michael Jordan honours the memory of the man with a charismatic performance that convinces us of his good intentions going forward, particularly when we see him rescuing an injured dog by the roadside and bribing a store-owner to allow his female friends to use the bathroom during New Year’s Eve festivities. Grant’s death was outrageous and to deny this would be unconscionable but the disingenuous way Coogler handles the narrative sets Grant up as a martyr, in a way he does not really deserve. MT

The Policeman who shot Grant was convicted of involuntary manslaughter eventually served 18 months in prison.